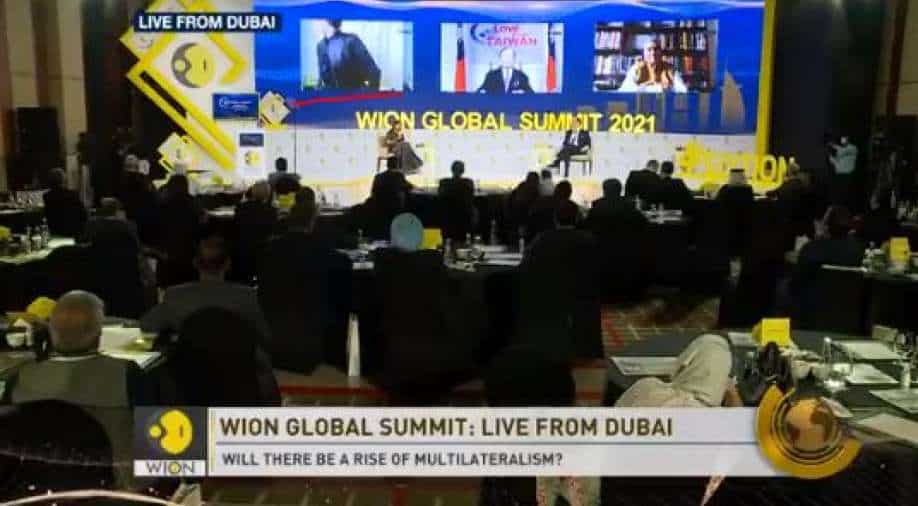 The audience at the summit were in for a surprise when the mention of "Wuhan virus" rattled Regina Ip Lau Suk Yee so much that she staged a walkout from the session.

There are a few perils attached with being a pro-China lawmaker in a room full of honest speakers. First, you get hurt at the slightest mention of the most popular name given to the deadly virus of the year. And second, you walk out - virtually, because, virus.

The audience at the summit were in for a surprise when the mention of "Wuhan virus" rattled Regina Ip Lau Suk Yee so much that she staged a walkout from the session -- when Michael Tsai, former defence minister of Taiwan, was speaking at the summit's second session The Post-Pandemic World Order.

Watch the full clip below. pic.twitter.com/CAwKAqW6bA

Regina had started with a broadside against the West for not paying enough attention to the outbreak of Sars-CoV2.

"We in Hong Kong are lucky because the number of cases are relatively low. In fact we had done pretty well initially and then, we suffered the second and the third wave. We have effectively curbed the spread of the virus. The pandemic led to leadership crisis, especially by the developed region, like the US and Europe. First, Trump refused to believe it was a pandemic. And that's why we still have a lot of Americans who think Covid-19 is a hoax," she said.

"The so-called leaders of the free world are not helping the other part of the world by helping them with vaccines. China is helping with vaccines while Russia is sharing the technology. Because of this lack of leadership and cooperation, it will take long before we can overcome this pandemic."

The mood was set. It was anti-West and pro-China.

But then came Tsai, who started with a bang. His first sentence had the words ''Wuhan Virus'', enough to rattle the otherwise composed Regina.

"Let me begin how nations failed in this pandemic - Covid-19 or you may call it the Wuhan virus..." Tsai began.

Regina interrupted, "I beg your pardon. I don't think you should refer to the virus as Wuhan virus. I'll leave this talk if you again use this term."

Tsai conceded defeat. And chose another way to put forth his thoughts.

Regina interrupted again, "I am sorry I'll have to leave this talk. Taiwan is not a nation. It's a renegade province of the People's Republic of China..."

That was all for her. She stood up and began to walk.

WION Executive Editor Palki Sharma requested her to stay, but she left, as Tsai smiled and continued.

The walkout, however, did not stop Tsai from speaking his mind.

"To talk about China, I think China has to take the responsibility for not informing about the pandemic in time. I would suggest that the WHO has to do a little bit more. I appeal that China has to respect human rights. Everyone in the world has to have concern for human rights in Hong Kong, Tibet and Xinjiang. We would also appeal to China and the Communist leadership in Beijing to stop their aggression towards Taiwan, Japan, etc in the South China Sea."

"Why China has to do that? Setting up missile against those countries? China sends their fighter jets almost everyday and their submarines in the South China Sea are causing disturbance in the Asia Pacific, and therefore, we appeal to China to stop their missile, threatening the countries in the region."

The novel coronavirus is believed to have originated in Wuhan in China, and people - loathing on Beijing for not doing enough to stop the spread of the virus - have since been calling it the 'Wuhan virus', much to the chagrin of the Chinese.

The WHO also recently conducted a probe to find out more about the origins of the virus, but did not give any satisfactory reasoning for its rapid spread.

The deadly virus has so far infected almost 125 million people across the world, killed over 2.5 million and has cost the world as many as $16 trillion.