Wuhan one year on: Crowds throng to celebrate New Year 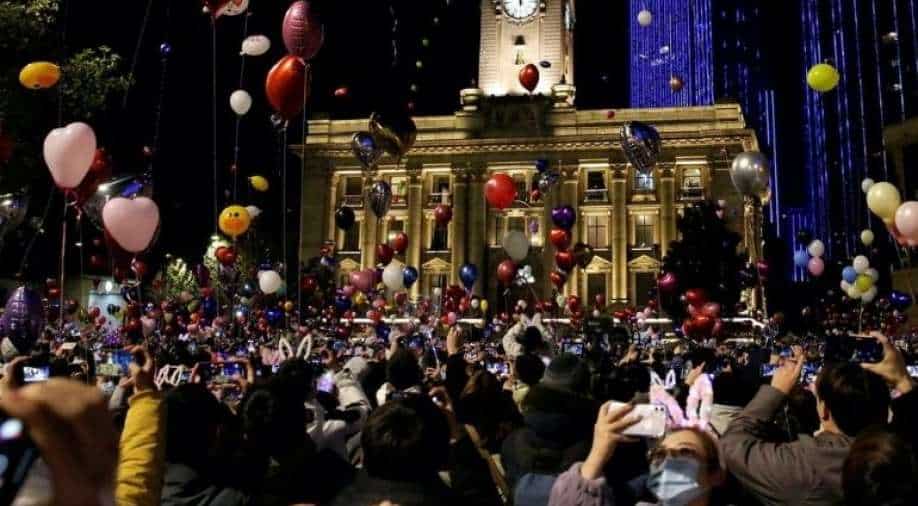 The COVID-19 pandemic, which has so far left more than 1.8 million dead and infected more than 82.9 million people, is believed to have originated in Wuhan in late 2019

Thousands of New Year revellers packed into the centre of Wuhan, the Chinese city where Covid-19 was first detected, cheering and releasing balloons to welcome in 2021.

Police erected fences to try to prevent congestion around the city's Customs House clock tower, but the measure was ineffective due to the large turnout of mainly young people.

Earlier, in his New Year address, President Xi Jinping declared that China has defeated the virus.

The COVID-19 pandemic, which has so far left more than 1.8 million dead and infected more than 82.9 million people, is believed to have originated in Wuhan in late 2019.

Hundreds of people watched a spectacular display with brightly coloured fireworks shooting into the sky, continuing the New Year celebrations from the night before.

But all the firecrackers and neon lights of the world cannot obliterate Wuhan's painful memories. Away from the propaganda police, the people of Wuhan remained scarred by the horror.

Those who lost their loved ones are demanding answers. One of them is Zhang Hai, a local who lost his father to the virus.

Zhang believes his father's life could have been saved. But the authorities did not tell him in time that the virus was contagious.

Speaking to an international news outlet --- Zhang said he won't rest until Wuhan officials are held accountable. He, along with many locals, tried to sue the government in Wuhan. But the attempt hasn't met much success.

The government is rewriting the Wuhan story and the narrative of the victims has no place in it. An exhibition in Wuhan celebrates the contribution of frontline workers...

At the entrance, there's a timeline on display. It describes Chinese President Xi Jinping's actions and decisions during the pandemic.

But it does not say that he was missing in action for weeks in January. It doesn't even mention the Huanan seafood market, where the first cluster of cases was found.

It has not a word on the public outcry that followed or reports that local-level officials hid crucial details in the early days.

The seafood market itself remains partitioned and sealed by eight-foot-high metal barricades.

A team of experts from the World Health Organization (WHO) is scheduled to arrive in China in early January for a long-awaited mission to look into the origins of the coronavirus.

Their first visit since the probe was announced more than six months back and has already a lost cause.

The team of international experts will not conduct an investigation of their own instead, they will augment the studies carried out by China.

It is safe to assume that China has wiped the truth about Wuhan. It only wants the world to see fireworks and pool parties.