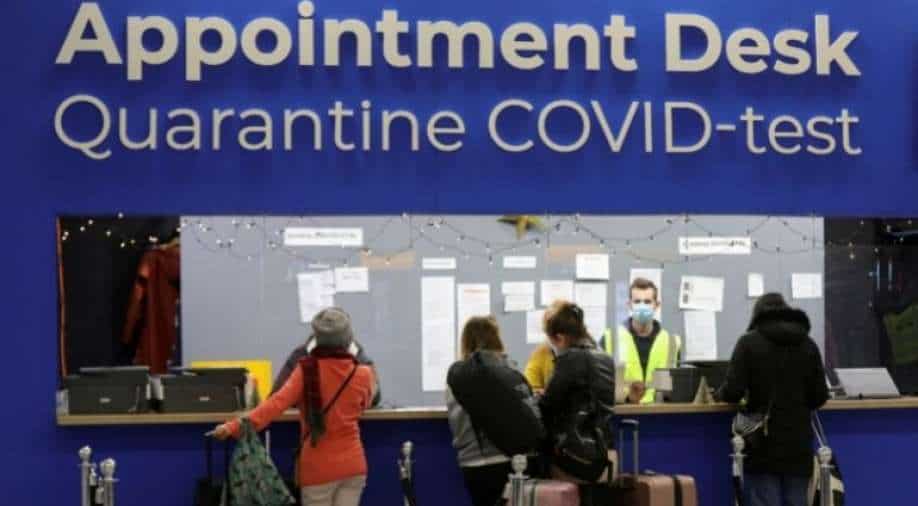 People wait in front of an "Appointment Desk" for quarantine and coronavirus disease (COVID-19) test appointments inside Schiphol Airport, after Dutch health authorities said that 61 people who arrived in Amsterdam on flights from South Africa tested positive for COVID-19, in Amsterdam, Netherlands, November 27, 2021. Photograph:( Reuters )

The Chairperson of the World Medical Association's Council, Frank Ulrich Montgomery, voiced alarm earlier in the day that the new coronavirus strain might be as severe as the Ebola virus and as contagious as the Delta coronavirus variation.

Just days after being discovered in South Africa, the new possibly more infectious omicron strain of the coronavirus has appeared in additional European nations, sending governments around the world rushing to stem the spread.

Following the discovery of two instances, the UK strengthened its requirements on wearing masks and testing overseas visitors on Saturday.

New instances were reported on Saturday in Germany and Italy, with the variation also being detected in travellers in Belgium, Israel, and Hong Kong.

In the United States, Dr Anthony Fauci, the government's top infectious disease specialist, said he wouldn't be shocked if the omicron version was also present.

"We have not detected it yet, but when you have a virus that is showing this degree of transmissibility and you are already having travel-related cases that they have noted in Israel and Belgium, and other places; when you have a virus like this, it almost invariably is ultimately going to go essentially all over..." Fauci said.

The Chairperson of the World Medical Association's Council, Frank Ulrich Montgomery, voiced alarm earlier in the day that the new coronavirus strain might be as severe as the Ebola virus and as contagious as the Delta coronavirus variation, according to Sputnik.

The new South African strain has been designated as a source of concern by the WHO because it has a high number of mutations (32), potentially making it more transmissible and deadly.

The WHO has given it the name Omicron, which is the Greek alphabet's 15th letter.

Following news of the new variety, the US, the EU, Canada, Israel, Australia, and other countries have imposed travel restrictions on many southern African countries due to health concerns.

In an extraordinary conference, EU officials resolved to encourage all 27 EU countries to limit travel from southern Africa.

A large number of members had previously done so.

Due to the new variation, the World Trade Organization cancelled a ministerial session, its largest in four years, at the last minute on Friday.

Vaccine makers have expressed optimism that they will be able to alter existing vaccinations to target the Omicron strain.

BioNTech of Germany and Pfizer of the United States said they expect results "within two weeks at the most" to see if their vaccine can be tweaked.

Moderna stated that it will create a booster for the new version.