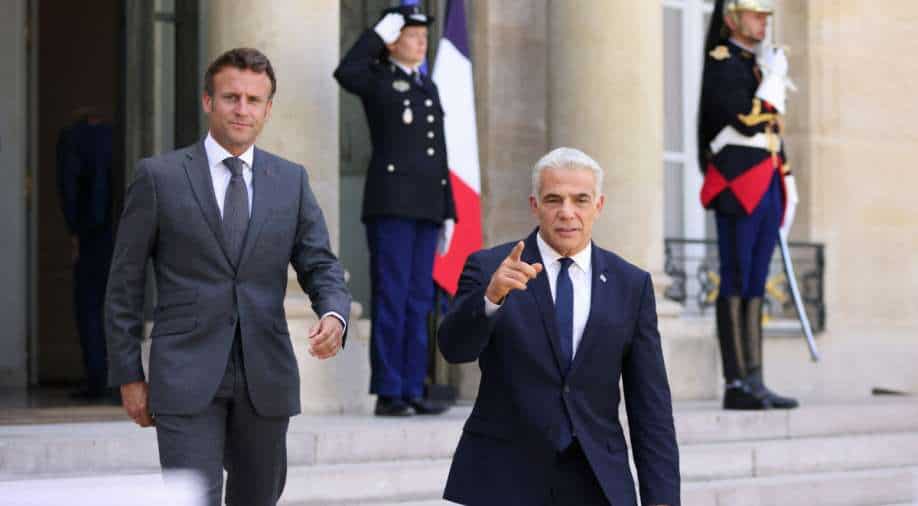 French President Emmanuel Macron made the statement in a joint press conference with Israeli Prime Minister Yair Lapid. Israel is fiercely against any nuclear deal with Iran

French President Emmanuel Macron on Tueday (July 5) said that world needed 'defend' nuclear deal with Iran the revival of which is being discussed between world powers and Iran. Macron made the statement in a joint press conference with Israeli Prime Minister Yair Lapid. Israel is fiercely against any nuclear deal with Iran.

Nuclear deal with Iran was struck by the USA under former president Barack Obama and other world powers including Russia in 2015. But Obama's successor Donald Trump took USA out of the deal and re-imposed crippling sanctions on the Islamic republic. After current President Joe Biden took office, the discussions to revive the nuclear deal have been going on but without result so far.

"We have to defend this (nuclear) deal (with Iran). And take in account the interests of our friends in the area, primarily Israel," Macron told reporters in the joit press conference.

Israel is opposed to any deal with Iran. The Islamic republic has over years, carved its own sphere of influence in West Asia. Saudi Arabia is also opposed to growing Iranian influence.

Before his arrival in Paris, Lapid reiterated his country's stance in presence of reporters travelling with him.

Acknowledging that France disagrees with that view, he said what was beyond dispute was that "Iran is violating the agreement and continues to develop its nuclear programme."

Israeli officials fear that giving Iran sanctions relief in exchange for curbs on its nuclear programme could allow Tehran to boost funding to Hezbollah, as well as the Palestinian militant group Hamas.

Macron, meanwhile, deplored that Iran "refuses to seize the opportunity offered to it to conclude a good agreement", but said he would "make every effort" to make Tehran "see reason".

Lapid's Paris visit comes days ahead of US President Joe Biden travelling to Israel and the Palestinian territories, before flying to Saudi Arabia for energy talks.

Washington is seeking to stabilise the global energy market following the Russian invasion of Ukraine, which led Moscow to cut its gas supplies to some European countries.