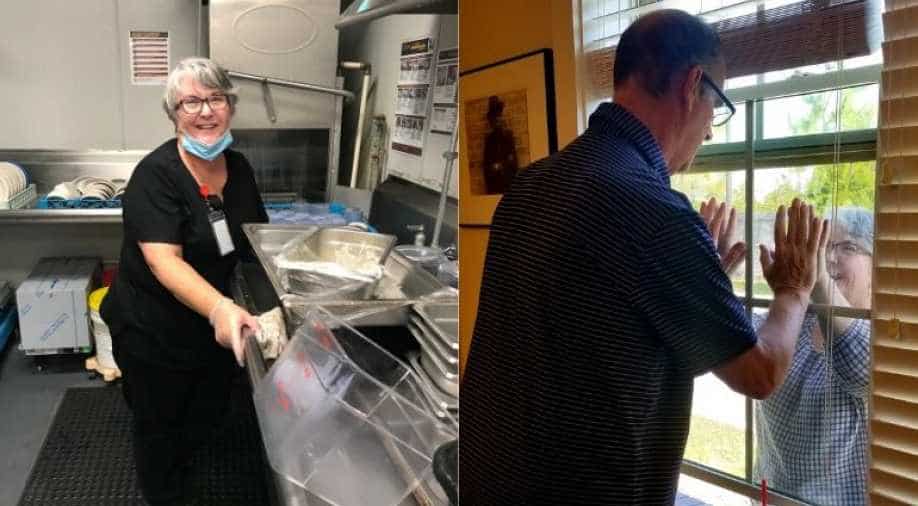 Wife takes dishwashing job at a nursing home to visit husband with Alzheimer's, who is in a nursing home and cannot be visited due to the coronavirus pandemic.

Mary Daniel of Jacksonville, Florida had not seen her husband, Steve, in 114 days after a state order barred visitors to nursing homes due to the coronavirus pandemic.

Daniel, 57, told WION that Steve, 66, who has early onset Alzheimer's disease, resides in a memory care unit of a nursing home. When the coronavirus spread across the state, Gov. Ron DeSantis banned visitations to nursing homes to protect patients and prevent the spread among a vulnerable population.

Mary appealed to Rosecastle, the nursing home, offering to bring a therapy dog or volunteer in another way, but the facility wasn’t sure how long the pandemic might last. Then, out of the blue, the corporate office reached out to Mary and offered her a job as a dishwasher. She grabbed the opportunity.

She finally reunited with her husband on July 3, after nearly four months of separation.

WION: Can you tell us more about you and your husband?

Mary: My husband is Steve Daniel. We've been married 24 years and he was diagnosed seven years ago with early-onset Alzheimer's disease. He was 59 years old and it totally came out of the blue and was just a devastating diagnosis. He went into a Memory Care Center in July last year. So he's been there for a year. He was incredibly social. He was a salesman by nature throughout his career and so he loved being around people, and I had him here at home with a caregiver and he was just locked in the house. So, we put him in memory care and he absolutely thrived, he loved being around people. He was the official greeter at the front door, and it was just a wonderful situation, until the lockdown happened. I saw him on March 10th and on March 11th, they called me and said he can't come back.

Steve had a visit with his nurse practitioner this morning so I thought it might be a good time for us to try a window...

WION: How has the COVID-19 pandemic affected your personal life and what led you to decide to be a dishwasher in order to meet your husband in the nursing home?

Mary: At the beginning of the lockdown, I called the centre and I asked them 'what can I do to get to him? Can I volunteer, can I bring my therapy dog?'. I raise puppies for K9s for Warriors, an organisation that provides dogs for veterans with PTSD. Maybe my dog could be a therapy dog there or even I'll take a job. Just tell me what I can do and I'll be happy to do it and they kind of said let's just see what happens. Those weeks turned into months and two weeks ago as I started getting vocal. I really started reaching out to local media and trying to get to the governor.

They called me and said we have a position available. It happens to be a dishwasher. But if you want it you can have it so I took it so I started two weeks ago. I'm working two days a week now and it is a legit job. I have to wash dishes, mop the floor. There is quite a bit of screening to get me in. I had to do a background check, COVID test, a TB test and I had to do a ton of training 20 hours of video training, but I finally got in to see him on March 3rd, and I've been able to spend hours and hours. I've worked for four days. So, I'll be working two days a week there now.

After 114 days I got to hug my husband today. I also washed alot of dishes. Proof where there’s a will there’s a way! I love you Steve Daniel! #EndAlz

WION: You have also started a Facebook group with other families to try to find other options in nursing homes, as they are isolated. How did you think of it and what response did you get?
Mary: I started the Facebook page because I wanted a way for everybody to be organised. I was seeing there were tens of thousands of people out there experiencing the same anxiety and the same frustration of trying to get to my husband as I was and so we needed a way to get organised. So, we are actually now setting up pages for each state so that the people in that state can organise together. We're going to show a blueprint and we're going to give it the idea of sort of how to get organised and what to do so that we can all then present to our particular state governments, our governors in particular exactly what we're asking of them.

WION: What is the one message that you want to give through this?
Mary: The main message that I'm trying to give to people is that obviously we understand the intentions of the shutdown. We know you have isolated our loved ones because you want to save them but what I'm trying to get across to everybody, and the point that I need to make, is we have isolated them and the isolation is going to kill them, dementia patients in particular need stimulation. They need their brain to be simulated and they need to feel loved. They need to feel affection. They don't understand what's going on and they need to have that feeling of love. Without that, their brain will just simply wither away and that's the biggest fear. Today is his best day; my husband is only going to get worse, so I want to be with him today. I've known the entire time that he's diagnosed that he's going to die from this, but I also know that I would be with him every step of the way and I haven't been and I'm so entirely incredibly grateful.

I'm so incredibly grateful that I'm with him now, but there are so many others out there that can't get to their loved ones and fulfill that promise of being with them and holding their hand until they take their last breath and it's time that we do that there are safe ways. We can do isolation rooms and visit outside. We want it to be safe, but they need us and we need to get to them.