With no antiretrovirals, Venezuela HIV patients rely on leaf remedy 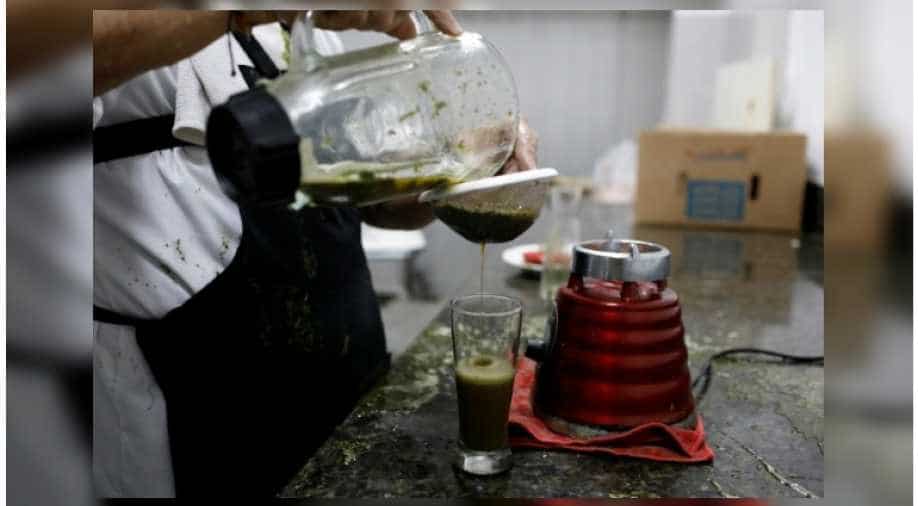 An HIV positive man strains a mixture of water and shredded leaves of the tropical tree guasimo in Caracas, Venezuela. Photograph:( Reuters )

Patients say they collect around 50 of the leaves, run them through a blender with water, and then strain the green liquid.

As Venezuela's hyperinflation and chronic medicine shortages leave HIV patients with little hope of obtaining life-saving anti-retroviral medications, many are now relying on the leaves of a tropical tree known called the guasimo.

Patients say they collect around 50 of the leaves, run them through a blender with water, and then strain the green liquid.

Doctors and patients alike have questioned the effectiveness of the remedy, which has for years been used as a complement to pharmaceutical treatment.

But HIV patients, hoping to ward off AIDS, increasingly see it as better than nothing.

For years patients received anti-retrovirals provided for free by the state, but supplies dried up as the country's socialist economic system unravelled.

Dr Carlos Perez began recommending the treatment at the start of 2018 when the shortage of antiretrovirals became acute. He tells patients to drink the guasimo leaf beverage twice a day for a month.

"It is a complementary treatment," said Perez, who is part of a group called Solidarity Action that helps provide care for HIV patients. "(One) component of these leaves is tannin, a biochemical component that apparently has antiviral properties."

The Information Ministry did not respond to a request for comment on the medicine shortages.

Antiretrovirals are available for those who can afford them, but few can. A box of 30 pills costs about $85 dollars, the equivalent of nearly a year of a minimum wage. Annual inflation reached 1.3 million per cent in November.

The Venezuela office of the Joint United Nations Programme on HIV and AIDS said in an email that Venezuela had 120,000 people who were HIV positive as of 2016, 61 per cent of whom were taking antiretrovirals.

Other doctors say the only real solution for HIV patients is for the government to create functioning policies that ensure the availability of medication.