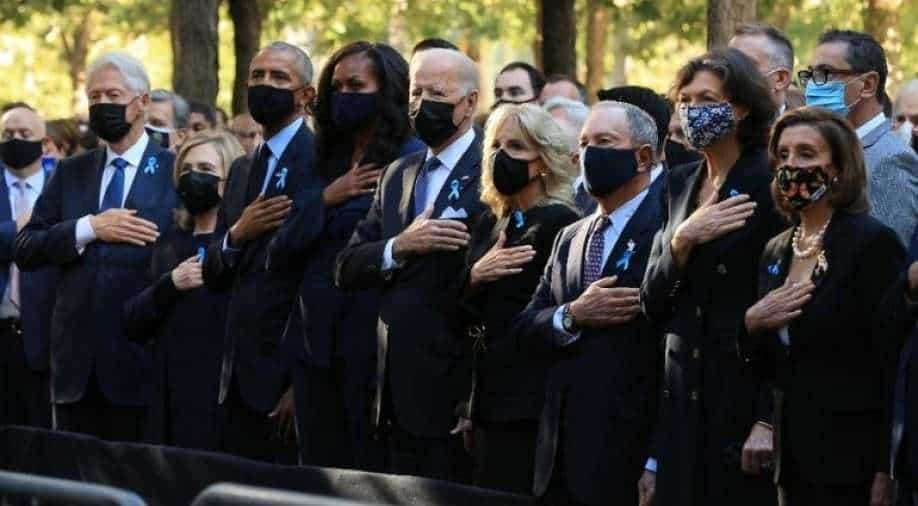 To mark the anniversary of the nation's worst terror attack, US Presidents Joe Biden, Barack Obama and Bill Clinton along with their wives shared a moment of silence at the National September 11 Memorial. They all wore blue ribbons and held hands over hearts. Hundreds of Americans gathered at the remembrance. Some people carried photos of loved ones lost on the dreadful day

US Presidents Joe Biden, Barack Obama and Bill Clinton along with their wives stood somberly side by side at the National September 11 Memorial to mark the anniversary of the nation's worst terror attack. They all shared a moment of silence on the occasion.

These leaders gathered at the site where the World Trade Centre towers fell two decades ago. They also wore blue ribbons and held hands over hearts.

Watched by hundreds of Americans gathered at the remembrance, a procession also marched with a flag at the memorial. Some people also carried photos of loved ones lost in the attacks.

Watch | US: Moments of silence to commemorate timings of 9/11 terror attack

A jet flew overhead in an eerie echo of the attacks before the event began. Biden marked the 9/11 anniversary for the first time as commander in chief. He is the fourth president to console the nation on the anniversary of that dreadful day.

At the trio of sites where the planes crashed, the president paid his respects. But he left the speech-making to others.

After the ceremony in New York City, the US president will visit the field near Shanksville, Pennsylvania, where a plane fell from the sky after heroic passengers fought terrorists to prevent it from reaching its Washington destination.

Finally, Biden will head to the Pentagon, where the world's mightiest military suffered an unthinkable blow to its very home.

The current US president now shoulders the responsibility borne by his predecessors to prevent future tragedy.