Will test Pakistan and give them information to act against terrorists: Tillerson to US?committee 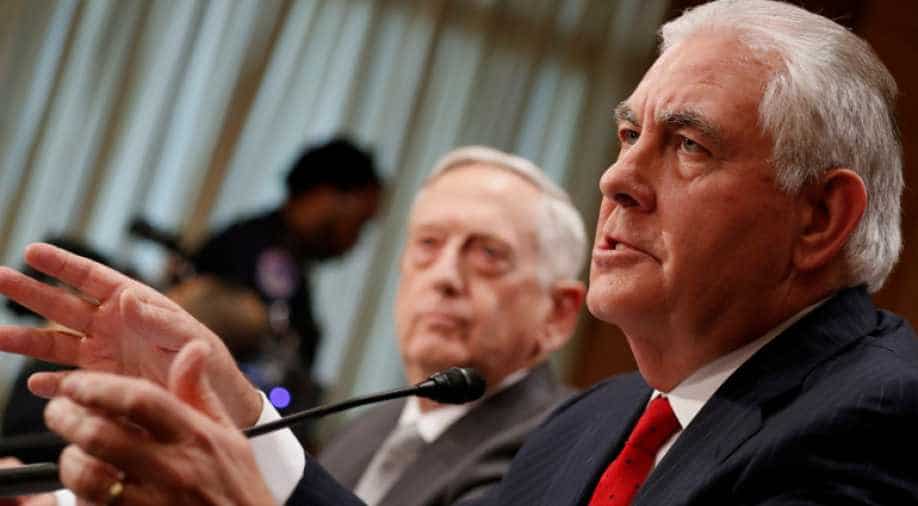 Secretary of state Rex Tillerson testifies about authorizations for the use of military force before the Senate Foreign Relations Committee on Capitol Hill in Washington. Photograph:(Reuters)
Follow Us

US secretary of state Rex Tillerson informed the Senate Foreign Relations Committee on Tuesday that Pakistan is willing to target terrorists if provided information by the US government.

Tillerson had recently visited Pakistan where he had met PM Shahid Khaqan Abbasi and Army chief Bajwa. In a closed-door meeting, the Pakistan PM had informed Tillerson that his country was committed to the "war on terror".

"We have produced results. And we are looking forward to moving ahead with the US and building a tremendous relationship," PM Abbasi had informed Tillerson.

The Senate hearing was for a new congressional war authorization, but the US lawmakers wanted to know about information that Tillerson had gleaned from the Pak authorities.

“Pakistanis have indicated — if we provide the information they will act. We’re going to have to test that, give them an opportunity to do so,” Tillerson told the committee.

“So, we are going to enter into an effort to have greater sharing of certain intelligence information,” he added.

Secretary Tillerson said he could only share “some broad contours” of the Pakistan visit in a public hearing and if the senators wanted to know more, he was willing to sit with them for in a closed-door meeting.

“But the conversation with the Pakistani government is for them to recognise that they will be one of the greatest beneficiaries of a successful peace process in Afghanistan," Tillerson told the US committee.

“Pakistan will find it in their interests to begin to disassociate these long-standing relationships that have developed over time with certain terrorist organisations,” he added.

“And it’s up to Pakistan I think, to think about their longer-term stability and their future by changing that relationship with these organisations,” the top US diplomat said.