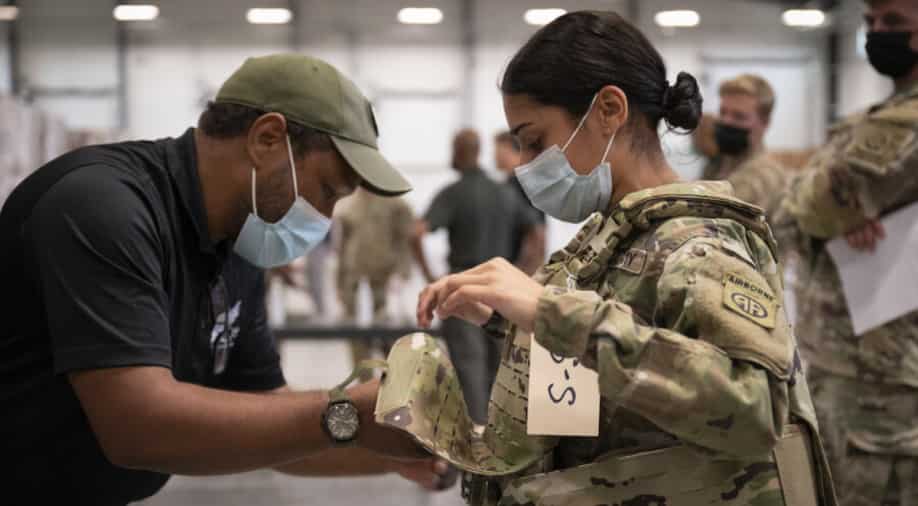 In this picture, a woman in the US army can be seen getting fitted for a scalable modular vest in North Carolina Photograph:( AFP )

Currently, more than 230,000 women are serving in the US military and military medics can perform abortions only in cases of proven rape, incest, or if the mother's life is in danger, under a 1976 law

The ban on abortion in the United States will prove to be more challenging for servicewomen as they face sexual assault and unwanted pregnancies occur more often than in the rest of society.

Currently, more than 230,000 women are serving in the US military and military medics can perform abortions only in cases of proven rape, incest, or if the mother's life is in danger, under a 1976 law.

Since many of these women are serving in conservative states such as Texas or Kentucky which have enacted sweeping abortion bans find a civilian clinic that performs the procedure and they will have to travel out of state.

For this, they will need to time off work that may hurt their careers and cover medical and travel expenses on modest military salaries.

Not only this, they will have to disclose sexual activity that is discouraged in the military.

In the US army, women are generally young and of childbearing age, with 75 per cent of new recruits being under 22.

According to a study by the journal Trauma, Violence and Abuse in 2018, nearly one-quarter of women have been victims of military sexual trauma and they are reluctant to turn to a military doctor as they are required to report the assault and order an investigation and in most cases of sexual abuse in the military are committed by superior officers.

The study also found that servicewomen avoid going servicewomen to military medics for the types of contraceptives that require a doctor's prescription in the United States.

Women serving in the US navy are reprimanded for sexual activity during deployments that last months according to another study published by the journal Military Medicine in 2020.

In order to expand access to abortion within the military health care system, Democratic lawmakers in the House of Representatives have introduced a bill as women in the military experience unwanted pregnancy at rates 22 per cent greater than civilians.