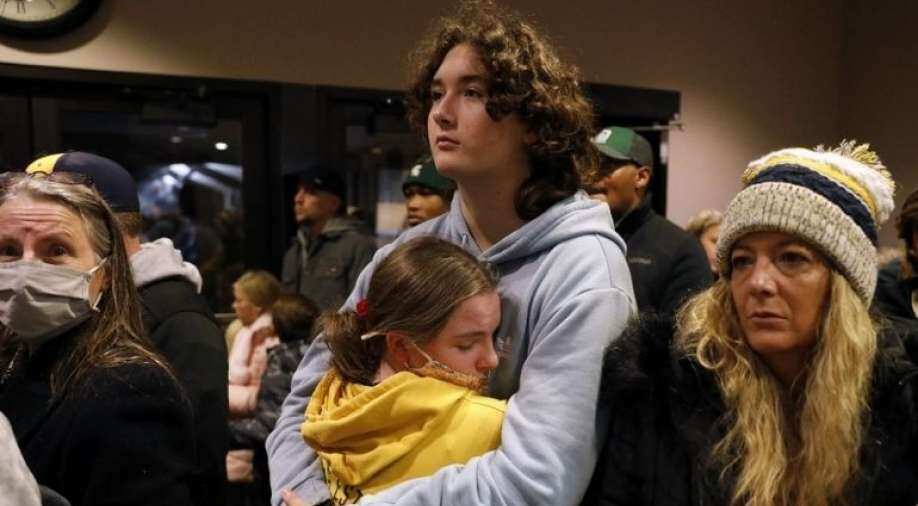 People hug during a vigil after a shooting at Oxford High School at Lake Pointe Community Church in Lake Orion, Michigan Photograph:( AFP )

A gunman opened fire at Oxford High School in Michigan on Tuesday afternoon, shooting 11 people. Three students were killed and several others were left critically and seriously injured.

A 15-year-old male student was later arrested in connection with the shooting and was being held at a juvenile jail, authorities said.

The deadly gunfire in Oxford, in Oakland County — about 30 miles north of Detroit — added to a growing list of shootings on U.S. school grounds this year after a lull during the coronavirus pandemic, when many schools held classes remotely.

The shooting was the deadliest this year, according to Education Week, which tracks such shootings and reported that there had been 28 so far in 2021.

Many details, including the name of the suspect and a motive, remained unclear. Here’s what we know.

What happened at the school?

When students at Oxford High School first heard the gunshots, they rushed for cover and used chairs to barricade themselves behind classroom doors. Within five minutes, authorities said, 11 people had been shot.

The gunman fired 15-20 shots with a semi-automatic handgun before being apprehended by deputies in the school hallway, authorities said. Seven bullets remained in the gun, the county sheriff, Michael Bouchard, said at a news briefing Tuesday night.

Had there been no intervention, Bouchard added, “we might be, if it’s possible, in a worse situation.”

What was the aftermath?

After the shooting, students said they fled from the building. Some parents rushed to a nearby grocery store to reunite with their children.

Officials across the country expressed shock and issued statements of sadness and frustration, as residents of Oakland County announced a vigil and prepared for funerals.

Democratic leaders renewed their calls for more to be done to reduce gun violence.

“No one should be afraid to go to school,” Gov. Gretchen Whitmer of Michigan said in a statement. Later, at a news conference, she added. “I think this is every parent’s worst nightmare.”

What do we know about the victims?

Authorities identified those killed as Hana St. Juliana, 14; Madisyn Baldwin, 17; and Tate Myre, 16, who died in a sheriff’s squad car while on the way to a hospital.

“There was no time to wait,” Bouchard said of the deputy who put Tate, who had been a football player, into his car.

Seven other injured students ranged in age from 14-17, officials said, including three who were in critical condition and another who was in serious condition.

The only adult who was injured, an unidentified 47-year-old teacher, had been discharged from the hospital, he added.

What do we know about the suspect?

Few details are known about the arrested student, whom authorities have described as a sophomore at Oxford High School and a resident of the Village of Oxford, a community of about 3,500 people located in the center of the larger Oxford Township area.

After the suspect was apprehended, he declined to speak while in the presence of his parents, officials said. The family has hired an attorney, they added.

Officials have not identified a motive.

“The person that’s got the most insight into the motive is not talking,” Bouchard said at the news briefing.

He added that the 9 mm Sig Sauer handgun used in the shooting had been bought by the suspect’s father four days earlier. The gun had 15-round magazines, he said, two of which had so far been found at the school.

Authorities said that they did not believe that the student had planned the shooting with anyone else and that they were still investigating.

“This is a uniquely American problem that we need to address,” Whitmer said Tuesday.