What are the ‘kill the bill’ protests in Britain all about? 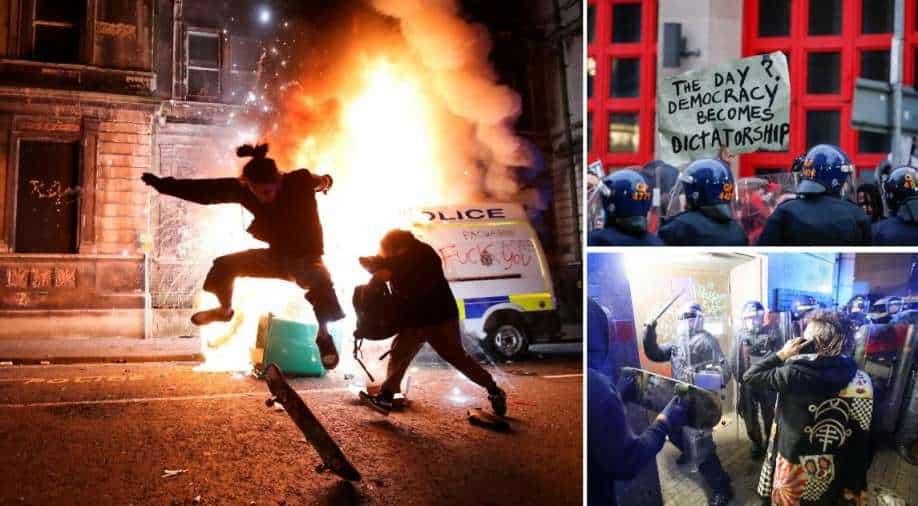 The proposed legislation has come under intense criticism in recent weeks in the wake of the killing of Sarah Everard, a young woman who was murdered in London after walking home from a friend’s house in the evening, and a subsequent vigil to honor her that was broken up by the police

That has been the refrain echoing in streets across Britain in recent weeks as protesters demand a rethinking of a sweeping crime bill that would give the police more power to deal with nonviolent demonstrations.

How the police should handle these mass demonstrations has become a topic of heated debate, especially as officers have been accused in some cases of over-aggressive responses. Coronavirus restrictions have added another layer to questions about the right balance between the rule of law and protecting civil liberties.

In Britain, that discussion has zeroed in on the new police bill.

The proposed legislation has come under intense criticism in recent weeks in the wake of the killing of Sarah Everard, a young woman who was murdered in London after walking home from a friend’s house in the evening, and a subsequent vigil to honor her that was broken up by the police.

Here is what you need to know about the proposed policing bill that would affect England and Wales, and the protests demanding that it be shelved.

What would the policing bill do?

The Police, Crime, Sentencing and Court Bill is an immense piece of proposed legislation that makes provisions for a broad range of issues in its nearly 300 pages. The bill — which covers England and Wales — introduces harsher penalties for serious crimes, end a policy of early prison release for some offenders and prevent unauthorized encampments, among other sweeping measures.

It also gives broad authority to police forces when it comes to handling protests — and that has proved to be a lightning rod.

Under current law, the police must first determine that a demonstration could result in serious public disorder, property damage or serious disruption to the life of the community before it can impose restrictions.

But the new bill would offer much broader powers for the police. It will leave much to their own discretion, and potentially allow them to criminalize protests they deem a “public nuisance.”

The police would be allowed to set time and noise limits on rallies, and protesters who do not follow restrictions they “ought” to know about, even if they have not received a direct order from an officer, would be vulnerable to prosecution.

The bill also makes it possible for those who damage memorials to be sentenced to up to 10 years in prison. That provision comes months after a statue commemorating a slave trader, Edward Colston, was toppled in Bristol last year during a Black Lives Matter demonstration.

There had already been pushback.

The government maintains that the bill provides for better policing and community protection. Priti Patel, the home secretary, said last week that there was “a balance to be struck between the rights of the protester and the rights of individuals to go about their daily lives.”

“In recent years, we have seen a significant change of protest tactics, with protesters exploiting gaps in the law which have led to disproportionate amounts of disruption,” Patel said, speaking in front of Parliament last week. She pointed specifically to tactics used by Extinction Rebellion climate change protesters to block trains and shut down cities.

Opposition lawmakers and rights groups have denounced what they see as a move to give police overly broad, and potentially problematic, powers. Many say they need more time to work through the potential implications.

The Local Government Association, a cross-party organization, said that certain aspects of the bill, particularly those focused on public protests, “warrant further formal consultation.” The group expressed concerns that a rushed timetable to vote on the bill “left little time to scrutinize the bill in sufficient detail.”

The Good Law Project, a British governance watchdog, said in a briefing that the bill “represents a serious threat to the right to protest,” and called for the portions of the legislation that deal with protests to be dropped.

Why have people taken to the streets now?

While rights groups have long had concerns about the policing bill and its potential impact on what they say is the essential democratic tool of protest, the legislation was suddenly thrust into the national spotlight after the murder of Everard.

The 33-year-old vanished off a London street on March 3, and her body was later found in a wooded area. A police officer was charged in her death.

The killing set off a national outcry over violence against women. Then came the day of the vigil.

Officers were widely criticized for breaking up the March 12 event, deemed illegal because of coronavirus restrictions. Images spread quickly showing the police moving in to halt speeches and arrest a group of women denouncing violence.

An independent investigation has been launched into conduct of the police, and the controversy raised questions about the ban on protests during the pandemic.

More broadly, the police's heavy-handed response to the vigil catalyzed the movement against the policing bill, shifting the debate to one about police overreach. The vigil took place just days before the crime bill was set to be debated in Parliament.

The problem with the bill, critics say, is not just that it gives officers more power to tamp down demonstrations. The bill makes no specific mention of violence against women — indeed, it includes more language about how to criminalize the defacing a statute than it does about crimes against human being motivated by misogyny.

A number of protests against the bill have been held nationally since the vigil for Everard in London. Last week, hundreds gathered outside government buildings, with crowds parading from Parliament Square to police headquarters in largely peaceful demonstrations. Other protests were held nationally last weekend.

On Sunday, one of them turned riotous in Bristol, where a small group set fire to police vehicles, smashed shop windows and clashed with officers. At least 20 police officers were injured, two seriously, and seven were arrests made, according to the police.

The bill has already passed one hurdle in Parliament, despite the concerns over civil liberties, when it was voted through during its second reading last week amid heated debate.

Now it goes to committee, when it will be assessed in detail, and experts and interest groups can weigh in. When that is over, the committee will report its findings — and perhaps suggest amendments — to the House of Commons, where it will be debated again.

But that process has been put off until later this year.

The government has tried to use the passions set off by Everard’s death to secure passage of the policing bill. The sweeping new police powers it contains, officials argue, would make women safer.

But many others have argued that the bill misses the point. The measure, they argue, fails to address the pervasive misogyny at the heart of crimes committed against women, as well as undermining the right to protest.

As the dispute has heated up, some lawmakers are taking a new look the bill.

The Labour party had originally planned to abstain from voting on the bill, but shifted its position last week to instead vote against it. David Lammy, a Labour lawmaker who is the opposition party’s justice spokesman, called the legislation “a mess.”

“The tragic death of Sarah Everard has instigated a national demand for action to tackle violence against women,” Lammy said. “This is no time to be rushing through poorly thought-out measures to impose disproportionate controls on free expression and the right to protest.”