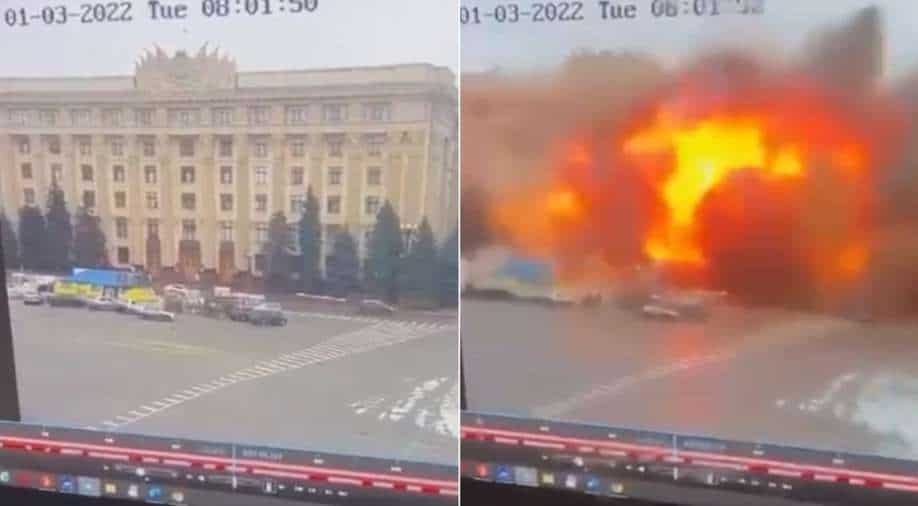 In a tweet on Tuesday (March 1), Ukraine's foreign ministry posted a dramatic video that appears to show an administrative building being blown up.

In the caption, the ministry wrote: "Russia is waging war in violation of international humanitarian law. Kills civilians, destroys civilian infrastructure. Russiaʼs main target is large cities that now fired at by its missiles."

The extent of destruction in Ukraine's second-largest city, Kharkiv is immense as it is pressed with Russia's invasion. In the latest development, news agency AFP reported that Russia shelled Kharkiv despite global calls to de-escalate the conflict.

Russia has been slapped with a range of sanctions by the Western countries that have smashed the economy.

ALSO READ | Russia accused of using a vacuum bomb in Ukraine. What is it?

Global pressure has mounted that saw a war crimes probe opened against Moscow. The office of the prosecutor of the International Criminal Court on Monday said it will seek court approval to open an investigation into alleged war crimes in Ukraine.

AFP reported citing the mayor that shelling by Russian forces in Kharkiv killed at least 11 civilians in residential areas and an AFP journalist in the city saw destroyed school, burned-out Russian armoured vehicles and corpses of Russian soldiers after earlier fighting.

Apart from shelling, satellite images have shown a vast column of military vehicles amassing just north of the capital Kyiv, where residents are braced for a Russian assault.

The Russian army has told them they can "freely leave" on one highway as it hints of attacks on civilian areas, news agencies reported.