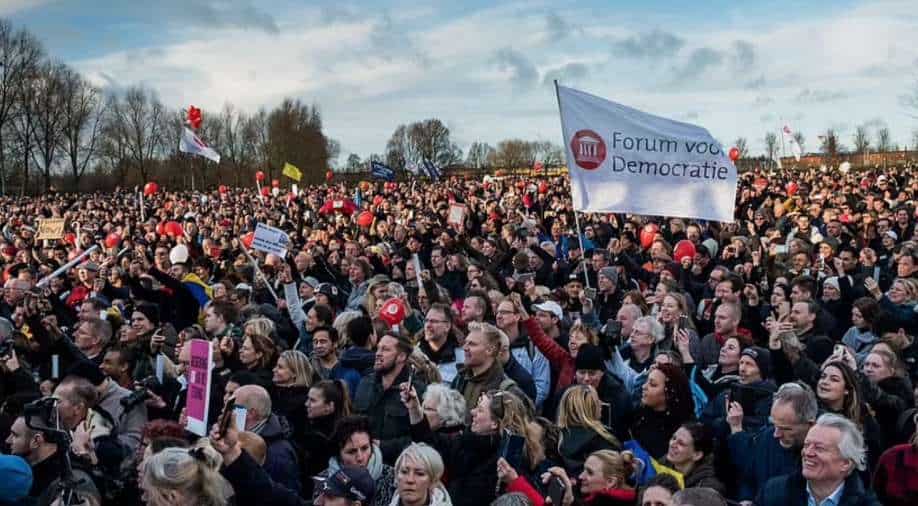 As per police, the anti-riot officers had to use force after protesters refused to leave despite a warning. Nearly four officers were injured in the clashes

Thousands of people took to the streets in Amsterdam to protest against the restrictions imposed due to Covid. This led to clashes and nearly 30 people were arrested for offences including assault, public disorder, possession of a forbidden weapon and not respecting security forces, said police. In several videos which have emerged on social media, the majority of protestors can be seen without a face mask.

As per police, the anti-riot officers had to use force after protesters refused to leave despite a warning. Nearly four officers were injured in the clashes.

The people of Amsterdam begin the new year in defiance of their government’s ban on protests, with tens of thousands taking to the streets in a massive protest against ongoing lockdowns, vaccine passes and COVID tyranny despite a vaccination rate over 75%.pic.twitter.com/qvYAJTDb9b

"This is Holland! Power to the people!" a protestor said.

The Netherlands began lockdown to prevent the spread of the Omicron variant just before the Christmas season. Prime Minister Mark Rutte announced the sudden shut-down, ordering the closure of all but the most essential stores, as well as restaurants, hairdressers, gyms, museums and other public places from until at least January 14.

"Closing all bars and restaurants in such an important month is incredibly painful and dramatic. We need compensation and an exit strategy", the Dutch association for hospitality services said.

All schools were closed a week early for the Christmas break while households were recommended to receive no more than two visitors and the gatherings outside were also limited to a maximum of two people.

As a result, the hospitality workers demanded compensation for lost income in the holiday season, while gym owners stressed the importance of exercise during a health crisis.