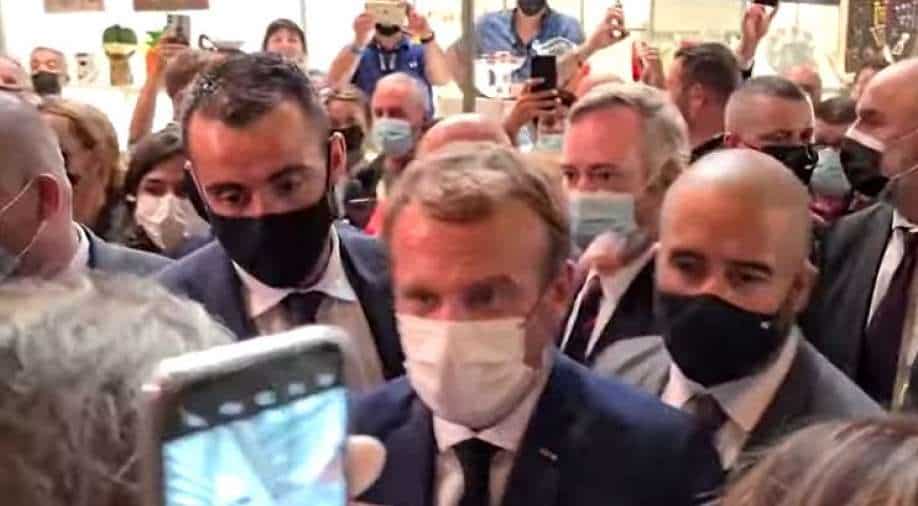 The incident is not the first time Mr Macron has been accosted by a member of the public. Photograph:( Reuters )

Emmanuel Macron was struck by an egg – while surrounded by press and members of the public in Lyon.The egg struck the French president on the side of the face before bouncing away during a visit to the Eurexpo convention centre.

While visiting Lyon on Monday to promote French gastronomy at an international food expo, French President Emmanuel Macron was pelted with an egg.

Macron was passing through the crowd when an egg bounced off him without breaking, according to a video widely circulated on social media.

Two bodyguards are seen moving closer to the president's shoulders to protect his shoulders.

Watch: From egg, and slap, to Macron to flying shoe at George W Bush — When world leaders were at the receiving end

Other bodyguards are also seen escorting a man away from the area in the footage.

According to reporters on the scene, Macron said, "If he has something to say to me, he can come."

Authorities have not disclosed any information about the man's identification or motivations.

Slapped in the face: In June, when welcoming the public in a tiny town in southeastern France, Macron was hit in the face by a guy.

He then condemned violence and folly.

Egged in 2017: When Macron was a presidential candidate in 2017, he was previously targeted with an egg.

In that case, the egg shattered on his head.

During a visit to southeastern France in June, he was hit in the face by a man in the crowd while he spoke to the people.

Macron's security team stepped in fast, tackling the individual and dragging the President away from the crowd barrier.

Following the slap, leaders from all political parties showed their support for France's president.

Macron, like his predecessors, enjoys meeting with members of the public in meet-and-greets.

Crowd baths, as they are known in French, have long been a fixture of French politics.

Macron, 43, has not yet announced his reelection run just over six months before France's next presidential election, but is anticipated to do so soon.

Macron is on a charm offensive with voters, with France's presidential elections less than a year away.

His party did poorly in provincial elections in June, which were carefully scrutinised ahead of the presidential race in April.

Political experts, however, acknowledged it was difficult to draw conclusions due to the low voter turnout.