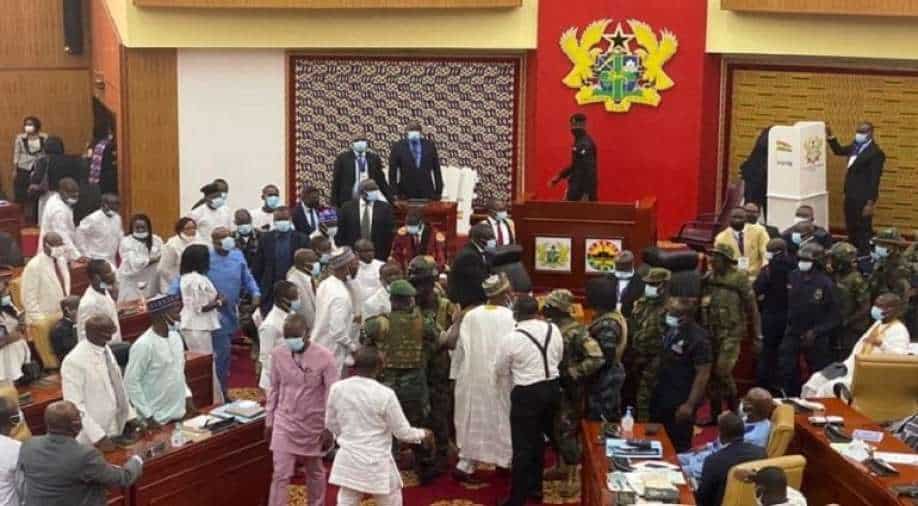 A brawl broke out on the floor of Ghana's parliament as lawmakers debated a proposed tax on electronic transactions that has divided the house for weeks Photograph:( Twitter )

The 'Electronic Communications Tax' also called e-levy, has divided the lower house of Ghana for weeks

Several ministers in Ghana threw punches at each other during a parliamentary session over electronic tax payments.

The 'Electronic Communications Tax' also called e-levy, has divided the lower house of Ghana for weeks.

Deputy Speaker Joseph Osei-Owusu suggested the tax be debated and voted upon under a hastened "urgency" procedure.

It has been fiercely challenged by the opposition and when the voting on Tuesday resulted in a tie, a brawl broke out.

Also read | Lawmakers throw bottles at each other, as brawl breaks out in Armenian parliament

While some delivered blows in the parliament, others tried to restrain their colleagues.

To your mind and in the silence of your heart, tell us - how would the e-levy budget fare if it were put to a referendum? This is probably the best way to know which side of @GhanaParliament is truly representing the people.#SremPol

Fighting inside the Ghanaian 🇬🇭 Parliament today and I didn’t see a single tweet from folks who like to rubbish Nigeria 🇳🇬 while praising Ghana 🇬🇭 every week. If that fight was from the Nigerian Parliament you’d have heard how that will never happen in Ghana 🇬🇭. Hypocrites.

The most chaotic place in Ghana now is unfortunately, our Parliament.

Ghana Boxing.
NPP and NDC MPs in parliament throwing punches. Where was Kennedy Agyapong though?😂 pic.twitter.com/g9w2k6Ooxd

According to minority leader Haruna Iddrisu, "We need to demonstrate to the country that our democracy is growing, and will not suffer some of these unacceptable sins and spectacles we've witnessed on the floor."

Critics argue that the tax will disproportionately affect lower-income people but Finance Minister Ken Ofori-Atta believes the levy would widen the tax net.

Analysts say overall economic activity will be decreased if it is imposed on those who rely heavily rely on mobile money transfers.

A vote on whether to proceed with the urgency procedure was postponed to January 18.