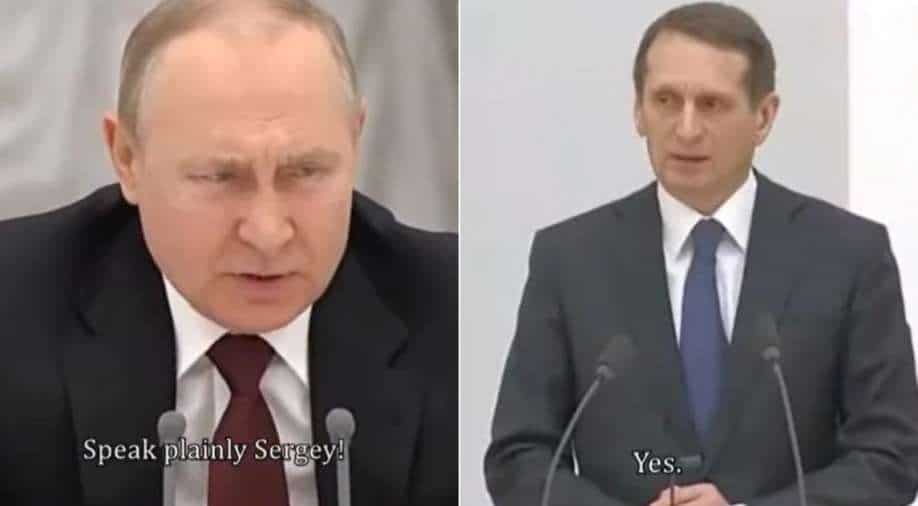 Russian President Vladimir Putin had a tense exchange with his spy chief Sergei Naryshkin during a crucial meeting of the Russian Security Council on Monday (February 21). The meeting was about the Russia-backed territories in east Ukraine.

The meeting happened before Putin ordered the deployment of troops to two breakaway regions in eastern Ukraine - the self-proclaimed Donetsk People's Republic and the Lugansk People's Republic. The Russian leader recognised the two regions as independent.

A clip from the Russian Security Council meeting has gone viral where the chief of the foreign intelligence service is interrupted repeatedly by Putin, who even asked Naryshkin to 'speak plainly!'

In the video, Naryshkin hesitated as he was interrupted by Putin while he was speaking about the recognition of Luhansk and Donetsk as independent regions and incorporating them into Russia.

In case you wonder whether the Russian intelligence community is afraid of speaking their mind in front of Putin.

Sergei Naryshkin, chief of the Foreign Intelligence Service, tried to say there could be ways to avoid war at the security council meeting. pic.twitter.com/2k96uJyHU7

After imposing sanctions on Russia, the United States President Joe Biden earlier stressed that the penalties were only a "first tranche" and more sanctions would come if Putin extended his country's military grip beyond the two territories in the eastern Donbas region.

On Tuesday, Biden said Washington would continue to supply "defensive" weapons to Ukraine against a Russian invasion, and deploy US troops to reinforce NATO allies in Eastern Europe.

"Let me be clear, these are totally defensive moves on our part," Biden said in a televised speech at the White House.