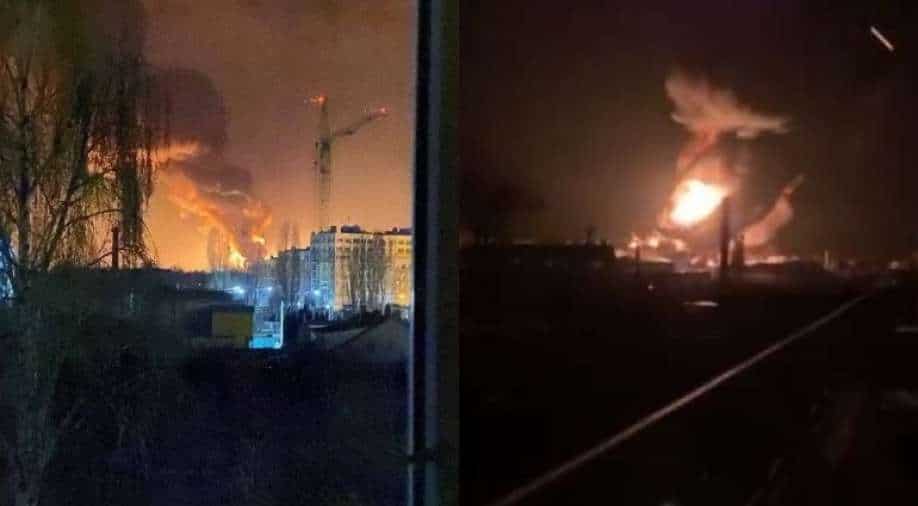 A massive fire broke out at an oil depot in Vasylkiv, Ukraine, close south of Kyiv, as a result of Russian missile attacks. The mayor of the city and central government officials have confirmed this, recommending residents to close their windows due to harmful smoke. Photograph:( Twitter )

As the Russia-Ukraine war escalates, an oil depot in Vasylkiv, barely 40 kilometres south of Kyiv, caught fire, according to the Kyiv municipal government.

At the start of the fourth day of Russian President Vladimir Putin's invasion of Ukraine, a suspected Russian missile strike occurred at a civilian oil facility outside Kyiv early Sunday morning local time, according to Ukrainian officials.

"A missile attack was launched on the oil depot in Vasilkov near Kyiv," Ukrainian MP Anna Purtova said.

It was an "environmental catastrophe," she said.

She also asked for a no-fly zone over Ukrainian airspace to be implemented by the US and the EU.

Also Read | Russian army to broaden offensive ‘from all sides’ against Ukraine: Kremlin

After an oil depot attack 24 miles away in Vasilkov early Sunday, the sky south of Kyiv was visibly lit.

#Україна #RussiaUkraineWar #UkraineWar #Ukriane #WARINUKRAINE ❗️The worst has been confirmed:“Dear Vasilkovskaya community! You see everything that is happening. See the fire. This, unfortunately, is burning oil depot on Kryuchki. An urgent evacuation of the population is needed. pic.twitter.com/zfiBuwi4ih

Meanwhile, Anton Gerashchenko, an adviser to the Ministry of Internal Affairs, said on Telegram, "The missile attack was carried out on the Vasilkovskaya oil depot of the KLO company. Rescuers have already left for the scene of the tragedy. Most likely, there were no casualties. It will burn for a long time. The environmental damage will be colossal."

Footage of fire at oil depot destroyed by Russian forces in Vasylkiv near Kiev. pic.twitter.com/HtzyfzlAtW

For the fourth day in a row, 198 civilians have been killed in Ukraine, according to the Ukrainian health ministry, as the Russia-Ukraine conflict continues to escalate.

According to Ukrinform, Viktor Liashko, the head of the Ukrainian health ministry, said three children were among those killed.

Separately, the Ukrainian Defense Ministry stated that 3,500 Russian occupiers had been killed and over 200 had been kidnapped.

The Russian Army claimed a variety of casualties and even claimed to have taken control of numerous cities in the neighbouring country.