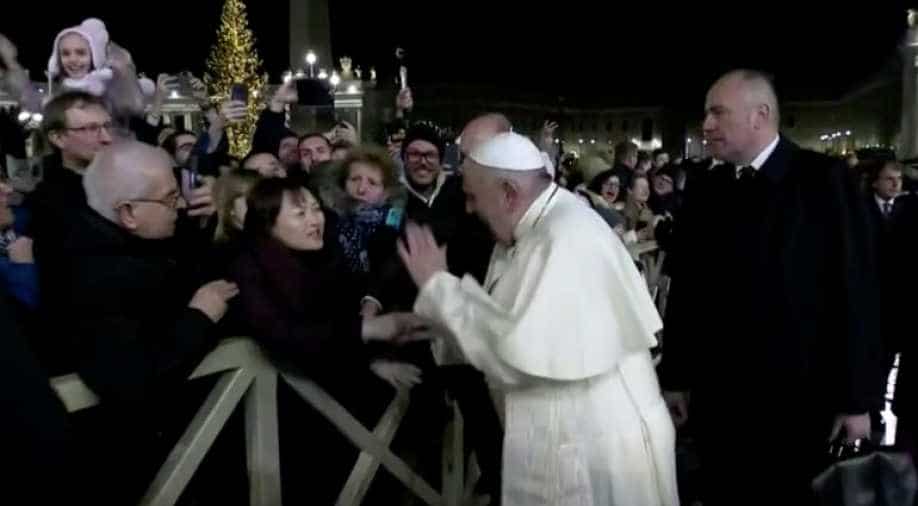 A visibly indignant Pope Francis had to pull himself away from a woman in a crowd in St. Peter's Square on Tuesday (December 31) after she had grabbed his hand and yanked him towards her.

The woman could be seen speaking something while she grabbed Pope's hand and pulled him towards her.

Pope Francis on Tuesday made headlines when he was caught on camera pulling away from a woman who was part of a crowd at St Peter's Square.

While walking through St Peter's Square in the Vatican City, Pope met and greeted people and pilgrims on the sideways when he was abruptly pulled by a woman.

In the video, the woman could be seen making the sign of the cross as the Pope approached. She abruptly grabbed his hand and pulled him towards her, causing him pain.

A visibly disgruntled Pope slapped the woman's hand to free himself from her grasp and pulled away while exhibiting pain and annoyance.

The incident took place when Pope Francis was out to meet and greet people at a New Year's Eve gathering at St Peter's Square.

Last year, a video featuring Pope Francis went viral wherein he was seen repeatedly withdrawing his right hand to avoid it being kissed by a long line of people.

The incident dates back to the pontiff’s visit to a Catholic shrine in Loreto last year.

The footage went viral and the pope’s refusal quickly entered what is known as the Catholic cultural wars between conservatives and progressives.

The Vatican did not clarify why was the pontiff not keen on having devotees kiss the silver ring on his right hand. It seemed the people did not know the correct protocol.

“It’s high time kissing bishops’ rings disappears altogether. It’s just ridiculous and has nothing to do with tradition. It’s an import from monarchies. Much of the pomp around bishops should be ditched,” Tweeted Jesuit priest Russell Pollitt.