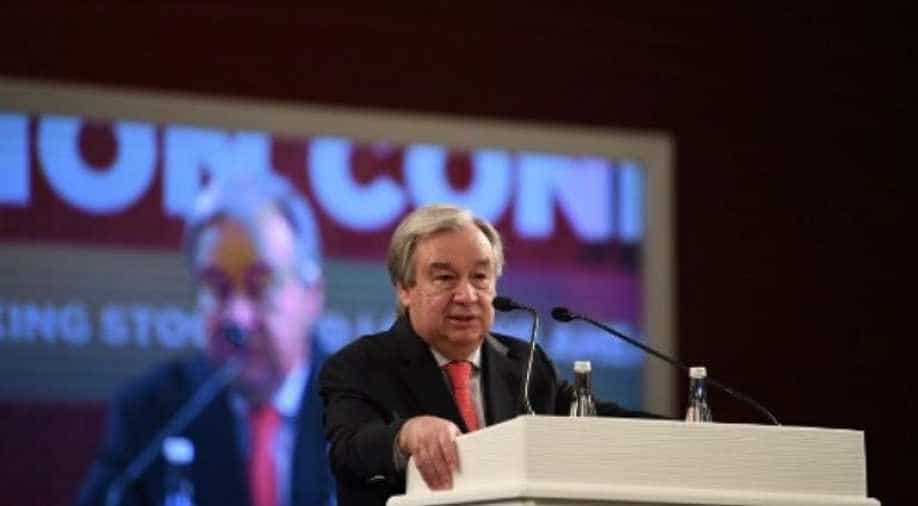 'Our war against nature must stop, and we know that it is possible,' Guterres said ahead of the December 2-13 summit.

The world must stop a "war against nature" and find more political will to combat climate change, United Nations Secretary-General Antonio Guterres said on Sunday, the eve of a two-week global climate summit in Madrid.

Around the world, extreme weather ranging from wildfires to floods is being linked to manmade global warming, putting pressure on the summit to strengthen the implementation of the 2015 Paris Agreement on limiting the rise in temperature.

"Our war against nature must stop, and we know that it is possible," Guterres said ahead of the December 2-13 summit.

"We simply have to stop digging and drilling and take advantage of the vast possibilities offered by renewable energy and nature-based solutions."

Cuts in emissions of greenhouse gases - mostly from burning carbon-based fossil fuels - that have been agreed so far under the Paris deal are not enough to limit temperature rises to a goal of between 1.5 and 2 degrees Celsius (2.7-3.6 Fahrenheit) above pre-industrial levels.

Many countries are not even meeting those commitments, and political will is lacking, Guterres said.

President Donald Trump for his part has started withdrawing the United States from the Paris Agreement, while the deforestation of the Amazon basin - a crucial carbon reservoir - is accelerating and China has tilted back towards building more coal-fired power plants.

Seventy countries have committed to a goal of 'carbon neutrality' or 'climate neutrality' by 2050.

This means they would balance out greenhouse emissions, for instance through carbon capture technology or by planting trees.

But Guterres said these pledges were not enough.

"We also see clearly that the world's largest emitters are not pulling their weight," he said, "and without them, our goal is unreachable."

Last year's U.N. climate summit in Poland yielded a framework for reporting and monitoring emissions pledges and updating plans for further cuts. But sticking points remain, not least over an article on how to put a price on emissions, and so allow them to be traded.

"I don't even want to entertain the possibility that we do not agree on article 6," Guterres said. "We are here to approve guidelines to implement article 6, not to find excuses not to do it."