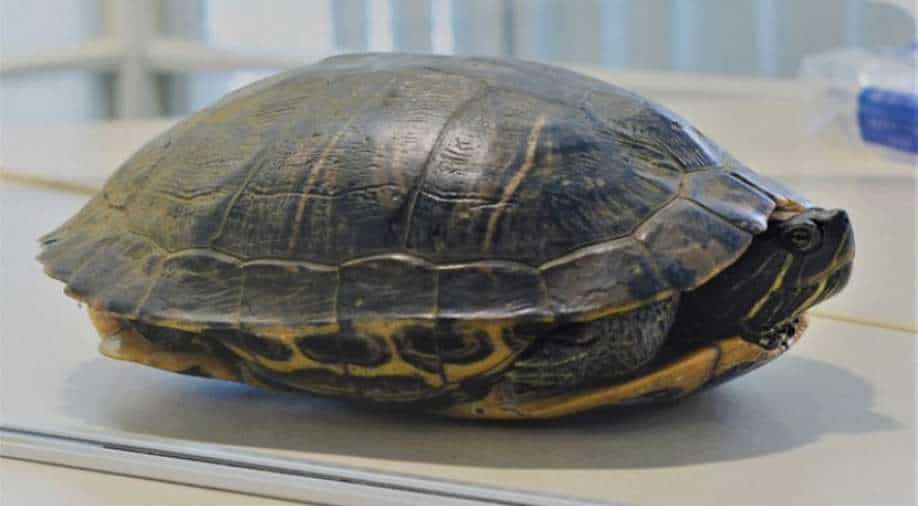 The turtle, weighing about 2 kilograms, is about 30 centimetres in length Photograph:( Twitter )

Narita officials believe the turtle may have come from the airport’s retention pond, located about 100 metres from the runway

A wandering turtle forced an airport in Tokyo to temporarily suspend its operations after it was spotted on the runway by a pilot who was about to take off.

After the pilot informed the traffic controllers, the runway was shut down for 12 minutes on Friday causing a delay for five flights as the airport staff scrambled to catch the creature.

The turtle, said to be measuring about 30 centimetres in length and weighing over 2 kilograms, was walking across the runway, Narita International Airport Corporation said.

Sometimes, runways are forced to close because of aircraft parts or birds, but it’s rare to find small animals, the company reportedly said.

Narita officials believe the creature may have come from the airport’s retention pond, located about 100 metres from the runway.

“The turtle might have crawled out of the reservoir near the runway to sunbathe since the weather has been warm the past few days,” an airport official was quoted as saying.

Also read | Smoking weed? Your phone can detect if you’re high on marijuana

The airport authorities said they will find out what type of turtle it is to decide whether it can be placed in a natural habitat.

“In Hawaii, sea turtles are believed to bring good luck. It might be a sign of a bright future,” an ANA official said in a statement.