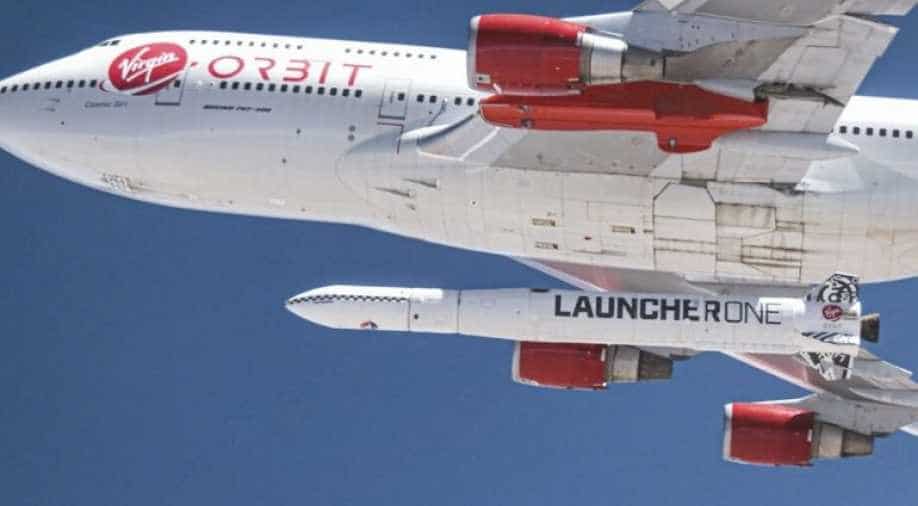 Virgin Orbit, Richard Branson's privately-funded air-launched rocket has failed to reach space on Monday after being released from company's specially modified 747 airplanes over the Pacific Ocean.

Also read: NASA and SpaceX brace themselves for a historic launch!

The rocket was designed to place small satellites into orbit but Virgin Orbit's two-stage LauncherOne was struck by an “anomaly” just after ignition of its kerosene-fed first stage engine.

"LauncherOne maintained stability after release, and we ignited our first stage engine, NewtonThree," Virgin Orbit said. "An anomaly then occurred early in first stage flight. We’ll learn more as our engineers analyze the mountain of data we collected today."

Boeing 747 called the "Cosmic Girl" carried the rocket and took off from Mojave Air and Space Port in California.

The "Cosmic Girl" had two people in the flight crew and two launch engineers on-board during the mission. After its failure, the company said the aircraft and its four-person crew were safe.

Monday's test flight was the first try for the company’s LauncherOne rocket to reach Earth orbit. Will Pomerantz, the vice president of Virgin Orbits said: "History is not terribly kind to maiden flights. Taking my best faith estimate, it’s about half of the maiden (rocket) flights fail. So that’s sort of the historical odds we’re against."

According to the imagery from National Weather Service radar in Los Angeles. the debris cloud near the drop zone of LauncherOne.

Seems the Los Angeles NEXRAD picked up what appears to be the breakup of @Virgin_Orbit's rocket shortly after release. (H/T @wxmeddler) pic.twitter.com/bvjYPNaJZQ

Virgin Orbit said that the rocket has  "accomplished" all pre-flight milestones according to plan. They said: “As we said before the flight, our goals today were to work through the process of conducting a launch, learn as much as we could, and achieve ignition,” Virgin Orbit said. “We hoped we could have done more, but we accomplished those key objectives today.”

Before the test flight Virgin Orbit's CEO and president, Dan Hart said: “You’d have to get into the technical discussion of what did we prove? What data did we get, and what data did we not get? And how could we augment it, if we needed to, with ground testing?”

“This is a test flight, so the purpose of this flight is to incrementally test the rocket and the airplane and the system as we pass through the operations,” Hart said Saturday. “So we’ll be getting data on our (propellant) load sequence, our captive carry flight out, and the full flight of the rocket after it drops through first stage flight, separation, second stage flight, and so forth.

“And we have telemetry stations around the world to capture the data as it comes down,” Hart said. “The data … is the product of that flight, and every increment that we learn, from the moment, that we start fueling the rocket, to flying it out, to lighting the engines, and observing the response of the system … is a huge step in the maturation of a system.”

We've confirmed a clean release from the aircraft. However, the mission terminated shortly into the flight. Cosmic Girl and our flight crew are safe and returning to base.