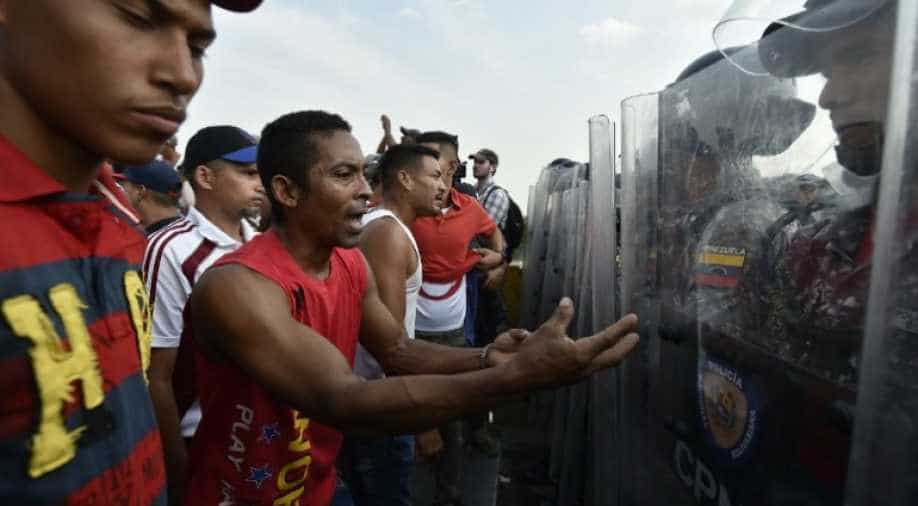 Venezuelans confront national policemen demanding them to let the humanitarian aid in, at the Simon Bolivar bridge, in Cucuta, Colombia. Photograph:( AFP )

'We want to work!' people chanted as they faced Venezuelan National Guard riot police blocking the crossing at the Urena border bridge to Colombia, one of several ordered closed Maduro late Friday.

Venezuelan security forces fired tear gas and rubber bullets Saturday to disperse a crowd demanding to cross the Venezuela-Colombia border, ordered closed by President Nicolas Maduro as tensions in the Latin American country soared ahead of an opposition deadline to bring in humanitarian aid.

"We want to work!" people chanted as they faced Venezuelan National Guard riot police blocking the crossing at the Urena border brige to Colombia, one of several ordered closed Maduro late Friday.

Meanwhile, four National Guard troops deserted their posts near the border, one greeted by a crowd of cheering Venezuelans on the Colombian side as he walked across. Three others smashed through a security barrier on the Simon Bolivar bridge crossing in their jeep.

Supporters of opposition leader Juan Guaido in Colombia are planning to cross the border carrying emergency supplies into Venezuela. Guaido has vowed humanitarian aid would enter his country despite a blockade.

Socialist leader Maduro has rejected the aid, which he's dismissed as a show and pretext for a US invasion.

Humanitarian aid has become the centrepiece of the stand-off between Maduro and Guaido, the 35-year-old leader of Venezuela's National Assembly who declared himself interim president exactly one month ago Saturday. Guaido has accused Maduro of rigging his re-election and is demanding a new vote.

On the eve of the face-off, Guaido defied a government ban on leaving the country and attended the "Venezuela Live Aid" concert organized by British billionaire Richard Branson just over the border in Colombia. The concert is aimed at raising funds to help the relief effort.

Guaido sensationally claimed that the Venezuelan military, whose high command has repeatedly declared absolute loyalty to Maduro, "participated in this process" to get him into Colombia.

Hours later, Caracas said it had closed much of the Colombian border, citing threats to Venezuela's security.

Guaido said that aid would come in on Saturday regardless of any military blockade.

His supporters plan to drive the aid from Colombia into Venezuela at the closed border crossings supported by a flood of volunteers and accompanied by Catholic priests in an attempt to avoid arrest.

Colombia and Venezuela share a 2,200 kilometer-long (1,370 miles) border, and trucks carrying aid could also drive across some of the countless illegal dirt roads that link the two countries across the porous border.

On Friday the tense stand-off turned deadly when two people were killed and 15 wounded as they tried to prevent Venezuelan troops from blocking an entry point on the Brazilian border.

"An indigenous woman and her husband were killed and at least 15 other members of the Pemon indigenous community were injured," said a local human rights group, Kape Kape.

The clash occurred in southeastern Bolivar state near to the border with Brazil, which Maduro ordered closed on Thursday.

Guaido called on the military to arrest those responsible for the killings, "or you will be responsible."

"It wasn't a clash, it was an attack," said Salomon Perez, who accompanied a brother and two nieces suffering from gunshot wounds by ambulance to a hospital in Brazil.

The United States "strongly condemns the Venezuelan military's use of force against unarmed civilians and innocent volunteers" on the border with Brazil, the White House said. "The world is watching," the statement added.

Battle of the bands

The "Venezuela Live Aid" concert, which featured some of the biggest names in Spanish-language music, was broadcast live online.

Branson said he hopes to raise $100 million for humanitarian aid over the next 60 days via internet donations. Meanwhile, aid is being stockpiled in Colombia, Brazil and the Caribbean island of Curacao because of Maduro's ban.

Guaido rallied his supporters when he showed up at the concert on Friday joined by Colombian President Ivan Duque, Chile's Sebastian Pinera and Mario Abdo of Paraguay. The leaders greeted the crowd before the concert ended.

Maduro's rival concert, decidedly smaller and featuring Cuban and local artists, began hours later nearby on the Venezuelan side of the border in Urena.

Performers took to the stage against a giant backdrop emblazoned with the words "#Trump Hands off Venezuela," with around 2,500 people in attendance.

Maduro said the event would last until Sunday.

Maduro, who has support from China, Russia and the military high command, accuses the United States of plotting a military intervention.

Moscow has blasted Washington for using aid as a "convenient pretext for conducting military action."