US won't 'tiptoe' around China with Asia stability at threat: Defence chief 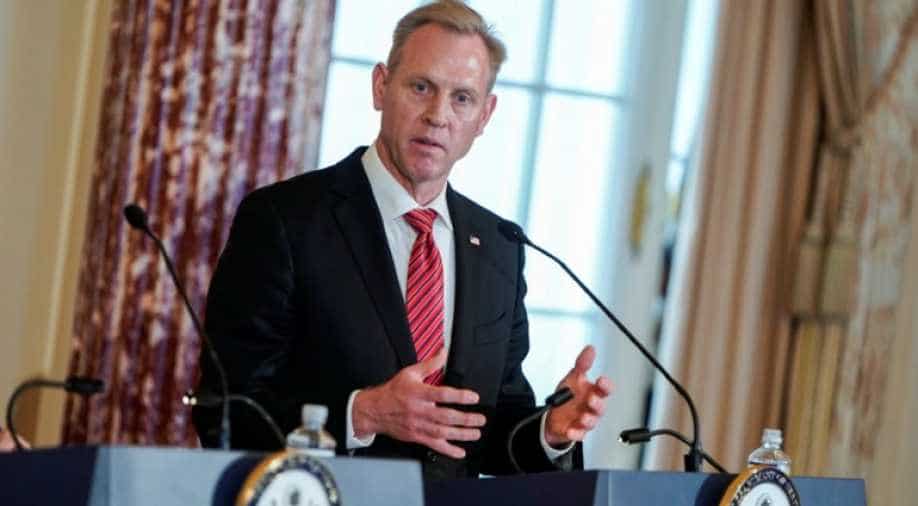 Shanahan said it was in Beijing's interests to have a constructive relationship with the United States.

The United States will no longer "tiptoe" around Chinese behaviour in Asia, with stability in the region threatened on issues ranging from the South China Sea to Taiwan, acting US Defence Secretary Patrick Shanahan said on Saturday.

Shanahan did not directly name China when making accusations of "actors" destabilising the region but went on to say the United States would not ignore Chinese behaviour, the latest in the exchange of acerbic remarks between the world's two biggest economies. He added, however, he was keen to foster a military relationship with Beijing.

"Perhaps the greatest long-term threat to the vital interests of states across this region comes from actors who seek to undermine, rather than uphold, the rules-based international order," Shanahan said at the annual Shangri-La Dialogue in Singapore, Asia's biggest security gathering.

"If the trends in these behaviours continue, artificial features in the global commons could become tollbooths, sovereignty could become the purview of the powerful."

Shanahan's first major speech since taking over as acting defence secretary in January came as the United States and China remain locked in an escalating trade war and at odds over a range of security issues in Asia.

His reference to artificial features was a swipe at islands built by China in the disputed South China Sea, a strategic waterway claimed almost wholly by Beijing.

"We're not going to ignore Chinese behaviour and I think in the past people have kind of tiptoed around that," Shanahan said later in answer to a question.

A senior Chinese military official responded to Shanahan's comments by saying that the United States' actions on Taiwan and the South China Sea were hardly conducive to maintaining stability in the region.

Shanahan said it was in Beijing's interests to have a constructive relationship with the United States.

But he added: "Behaviour that erodes other nations' sovereignty and sows distrust of China's intentions must end."

"Until it does, we stand against a myopic, narrow, and parochial vision of the future, and we stand for the free and open order that has benefited us all - including China."

"I was very impressed and I certainly am looking much more positively on potentially voting for him when his confirmation happens," Democratic Senator Tammy Duckworth told reporters.

The White House said last month that it plans to nominate Shanahan as defence secretary, a job he has been doing in an acting capacity since January, the longest in Pentagon history. His nomination, if and when it comes, will have to be confirmed by the Senate.

"The way he laid out the facts and the United States' position in a firm way, but very upfront, impressed me tremendously," Duckworth added.

Senator Angus King, a political independent from Maine and on the Senate Armed Services Committee, said Shanahan had "distinguished" himself and was hopeful the confirmation hearing would take place within about a month.

Shanahan said that he did not see the current trade dispute between China and the United States as a trade war, but rather just part of trade negotiations.

An increase in Chinese tariffs on most US imports on a $60 billion target list took effect as planned on Saturday, after Washington's own tariff increases.

Shanahan also became the latest senior US official to call out Chinese telecoms giant Huawei, saying in his speech that it was too close to the Chinese government.

China's Defence Minister Wei Fenghe is due to address Asia's marquee security summit on Sunday when he is expected to criticise the United States over its implied support for a democratic Taiwan.

On Friday, Shanahan held talks with Wei that both sides called "constructive", although their teams later reverted to type with critical comments on each other's defence strategies.

Along with the expected warnings aimed at China, Shanahan referred to cooperation between the two countries in areas like military-to-military exchanges, counter-piracy and joint efforts to reduce the "extraordinary threat" posed by North Korea's military ambitions.

"I am confident that we'll solve problems," Shanahan said.

Shanahan also called on US allies to contribute more to their own defence. Burden-sharing, from Asia to Europe, has long been a demand of President Donald Trump's administration.

"We need you to invest in ways that take more control over your sovereignty and your own ability to exercise sovereign choices."