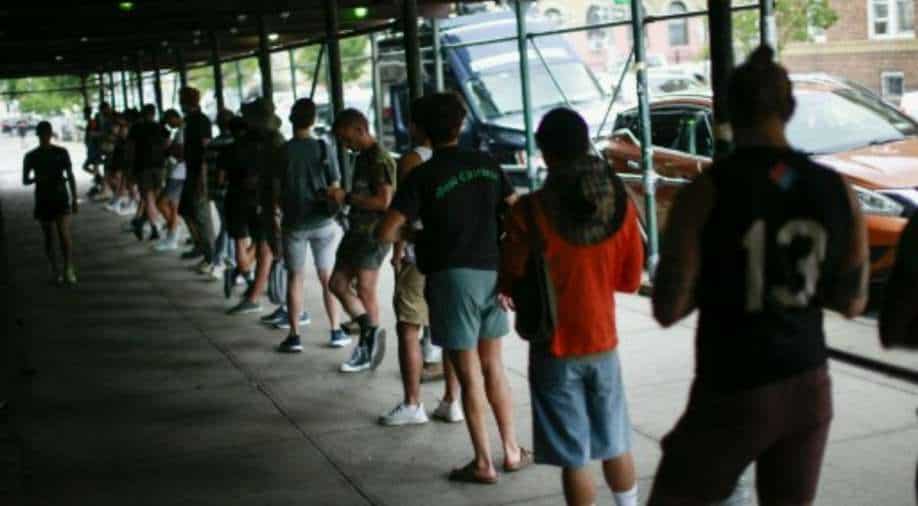 People wait in line to recieve the Monkeypox vaccine before the opening of a new mass vaccination site at the Bushwick Education Campus in Brooklyn on July 17, 2022. Photograph:( AFP )

US reported over 5,000 monkeypox cases as New York declared a public health emergency over the weekend.

New York City Mayor Eric Adams asserted that his officials will "expand outreach and access to vaccines" while informing that nearly 150,000 New Yorkers may currently be at risk of monkeypox exposure.

Adams called it a "growing outbreak" as New York Governor Kathy Hochul issued an order declaring the monkeypox virus a state disaster emergency. According to the CDC, America's financial hub has recorded 1,345 monkeypox cases as Hochul pointed out New York accounted for one in four monkeypox cases in the US.

The CDC has said many of the monkeypox cases have been detected among gay, bisexual and other men who have sex with men with patients showing typical symptoms including fever, headache, muscle pain, chills and exhaustion. The symptoms also include respiratory issues like sore throat, nasal congestion and cough.

As the US continued to witness a surge in monkeypox cases, Spain recorded two deaths due to the virus last week. The WHO has said over 18,000 monkeypox cases have been detected in the United States with Spain being the worst-hit country in Europe with over 4,000 cases.

Watch: Monkeypox Outbreak: How it spreads, who is at risk?

In Brazil, a man infected with the monkeypox virus died in Belo Horizonte even as officials pointed out that the patient suffered from co-morbidities while emphasising that the "death rate is very low". Brazilian health officials have recorded nearly 1,000 monkeypox cases so far. The WHO informed earlier that monkeypox cases have been widely reported in Europe and the Americas.

Catherine Smallwood, Senior Emergency Officer at WHO Europe alerted agencies saying that more deaths were expected due to the continued spread of the virus in Europe. The WHO official stated that the transmission of the virus needed to be "interrupted" quickly in Europe to stop the outbreak amid rising number of cases.