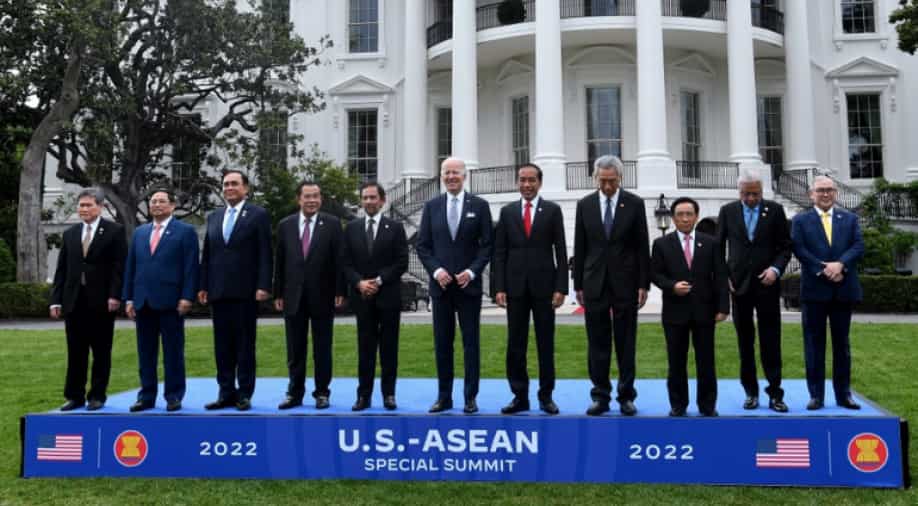 US President Joe Biden (C) and leaders from the Association of Southeast Asian Nations (ASEAN) pose for a group photo on the South Lawn of the White House in Washington, DC Photograph:( AFP )

Aimed at countering the rising influence of China, the deal is part of a campaign to show that the United States still prioritises Asia despite months of intense focus on repelling Russia's invasion of Ukraine

US President Joe Biden has made energy and security pledges worth $150 million to Southeast Asian leaders during a summit in Washington.

Aimed at countering the rising influence of China, the deal is part of a campaign to show that the United States still prioritises Asia despite months of intense focus on repelling Russia's invasion of Ukraine.

Biden met with representatives from Brunei, Indonesia, Cambodia, Singapore, Thailand, Laos, Vietnam, Malaysia, and the Philippines on Thursday to highlight that Washington remains focused on the Indo-Pacific and the long-term challenge of China, which it views as the country's main competitor.

Indonesian President Joko Widodo said, "I hope this meeting can build momentum for the return of the US presence in the region."

Biden's administration is working on an Indo-Pacific Economic Framework (IPEF) and in a step towards that direction, the new financial commitment includes a $40 million investment in infrastructure intended to help decarbonise the region's power supply and $60 million in maritime security.

According to Malaysian Prime Minister Ismail Sabri Yaakob, "The US should adopt a more active trade and investment agenda with ASEAN, which will benefit the US economically and strategically."

The US Centers for Disease Control in Hanoi is also working on a project to test for emerging respiratory diseases in urban Southeast Asia.

Previously, China had utilised its debt trap tactic to pledge $1.5 billion in November last year for assistance in development to ASEAN countries over three years to fight COVID and fuel economic recovery.

Economic powerhouses of Asia are connected through the water bodies around the South China Sea, among the busiest in the world, and are facing territorial disputes with an increasingly assertive Beijing.