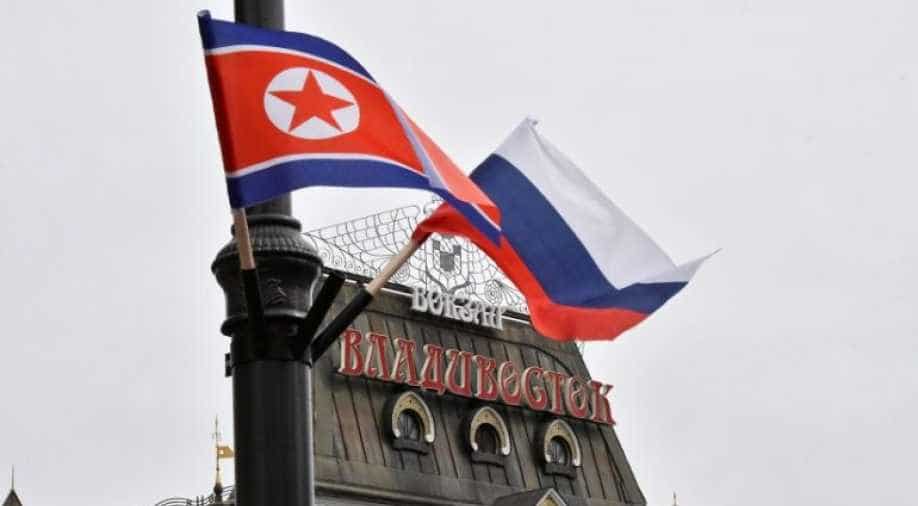 File Photo: State flags of Russia and North Korea fly in a street near a railway station during the visit of North Korea's leader Kim Jong Un to Vladivostok, Russia  Photograph:( Reuters )

A proposal by China and Russia to ease UN sanctions on North Korea increases pressure on the United States and signals what is the likely end of unified efforts to persuade Pyongyang to give up its growing nuclear and missile arsenal.

On Monday China and Russia proposed the United Nations Security Council lift a ban on North Korea exporting statues, seafood, and textiles, and ease restrictions on infrastructure projects and North Koreans working overseas, according to a draft resolution seen by Reuters.

The plan comes at a crucial moment just weeks before the deadline set by North Korea for Washington to offer more concessions and highlights deepening divides over how to engage with North Korea.

Russia and China, which both wield veto power on the Security Council, were key votes in imposing the sanctions in recent years under the "maximum pressure" campaign championed by US President Donald Trump's administration.

The United States says it would be premature for the UN to consider lifting sanctions right now and has called for North Korea to return to the negotiating table.

Since North Korea and the United States established a detente in 2018, however, both Moscow and Beijing have increasingly voiced support for easing sanctions. Now, the official proposal represents a new level of public pressure on the United States, analysts said.

Last week, China's ambassador to the UN said a major cause of the deadlock and rising tensions was a failure to respond to "positive steps" taken by North Korea toward denuclearisation.

"The Russia-China initiative at UNSC is likely coordinated with Pyongyang as the proposal reflects North Korea's demands to be rewarded for the concessions it has already taken," said Artyom Lukin, a professor at Far Eastern Federal University in Vladivostok. "Pyongyang's recent threats of escalatory action are now backed by the Sino-Russian diplomatic offensive."

China and Russia are effectively undercutting the United States’ current strategy on North Korea, he said. "Pyongyang has again demonstrated its unrivaled capacity to exploit the rivalry between great powers."

Other analysts noted Beijing and Moscow have shown increasing unity on the issue of security on the Korean peninsula.

Sanctions relief is crucial for both China's Northeast Area Revitalisation Plan as well as Russia's economic interests in the Russian Far East, said Anthony Rinna, a specialist in Korea-Russia relations at Sino-NK, a website that analyses the region.

"Recently the Chinese government has stated that sanctions relief for North Korea is imperative, and Beijing has a much higher chance than Moscow of being taken seriously in Washington," he said. "Furthermore, sanctions are a part of the joint Sino-Russian action plan for peace on the Korean Peninsula."

The call to lift sanctions affecting rail infrastructure and foreign workers, for example, are two areas that are key economic interests for Moscow, Rinna added.

North Korea has set a year-end deadline for Washington to make concessions like easing sanctions. Otherwise, leader Kim Jong Un has said he may be forced to choose an unspecified "new path."

China and Russia appear concerned about what North Korea's next steps may be, and the call for sanctions relief is a way to try to avoid a return to the nuclear weapons tests and intercontinental ballistic missile (ICBM) launches that led the two countries to join the United States and its allies in imposing the strict sanctions, analysts said.

"Moscow generally feels that pressure is the wrong tack to take with North Korea, yet if Pyongyang engages in more provocations in the coming year this could be a serious test for both China and Russia's tolerance of North Korea," Rinna said.

Behind the scenes, there are reports that unofficial trade between China and North Korea has also increased.

"This could give Pyongyang pause if they're pondering a hardline approach for next year," said Andray Abrahamian, a visiting scholar at George Mason University Korea. "That said, they traditionally have pushed back hard against supposed Chinese leverage, aware that China is willing to punish North Korea."

Daniel DePetris, a fellow at Defense Priorities, a Washington-based think tank, said he hopes Russia and China teaming up could keep Kim restrained for the time being.

"We don’t know what China and Russia’s red-lines are, but it’s reasonably safe to assume another ICBM or nuclear test would force both countries to recalculate its current position," he said.