US envoy Biegun to North Korea: 'We're here, you know how to reach us' 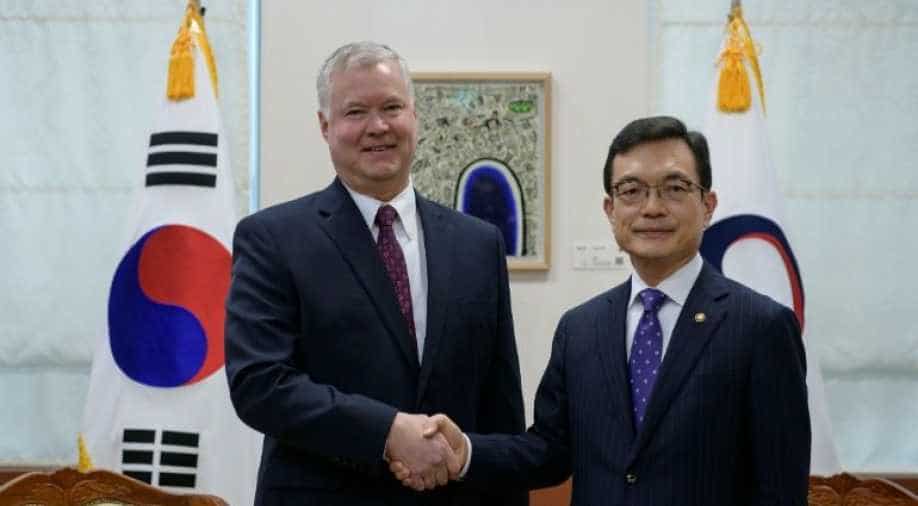 Tension has been rising in recent weeks as Pyongyang has conducted a series of weapons tests and waged a war of words with US President Donald Trump, stoking fears the two countries could return to a collision course they had been on before launching diplomacy last year.

Biegun arrived in Seoul on Sunday amid speculation he might try to salvage negotiations by reaching out to North Korea, which has vowed to take an unspecified "new path" if Washington fails to soften its stance before the end of the year.

"The United States does not have a deadline. We have a goal," Biegun told a joint news conference with his South Korean counterpart Lee Do-hoon - Special Representative for Korean Peninsula Peace and Security Affairs at the Ministry of Foreign Affairs of the Republic of Korea.

"Let me speak directly to our counterparts in North Korea. It is time for us to do our jobs. Let's get this done. We are here, and you know how to reach us," Biegun said.

Kim and Trump met three times since last year to negotiate an end to North Korea's nuclear and missile programmes but there has been scant progress. Working-level talks led by Biegun in October in Stockholm fell apart.

On Sunday, state media said North Korea had successfully conducted another test at a satellite launch site aimed at "restraining and overpowering the US nuclear threat," a second such test in a week.

Seoul officials are concerned the flare-up may signal a repeat of earlier cycles of détente ending in escalations.

Biegun, who also met South Korean President Moon Jae-in on Monday, expressed regret over statements from North Korean officials in recent weeks, describing them as "so hostile and negative and so unnecessary".

"But it does not have to be this way. It is not yet too late," Biegun said.

Analysts said chances are slim for North Korea to accept Biegun's call for dialogue, citing Pyongyang's recent statements Washington had "nothing to offer" even if were talks to reopen.

"For North Koreans, Biegun effectively challenged their supreme leader by brushing off the year-end deadline," said Shin Beomchul, a senior fellow at the Asan Institute for Policy Studies in Seoul.

Trump's re-election battle and the impeachment inquiry against him may have led Kim to overestimate North Korea's leverage, diplomatic sources have told Reuters.

"North Korea won't likely show up at the negotiating table unless the United States promises to make clear concessions instead of calling for a meeting for meeting's sake," said Kim Dong-yub, a professor at Kyungnam University in Seoul.