US hits 'dictator' Maduro with sanctions over disputed Venezuela vote 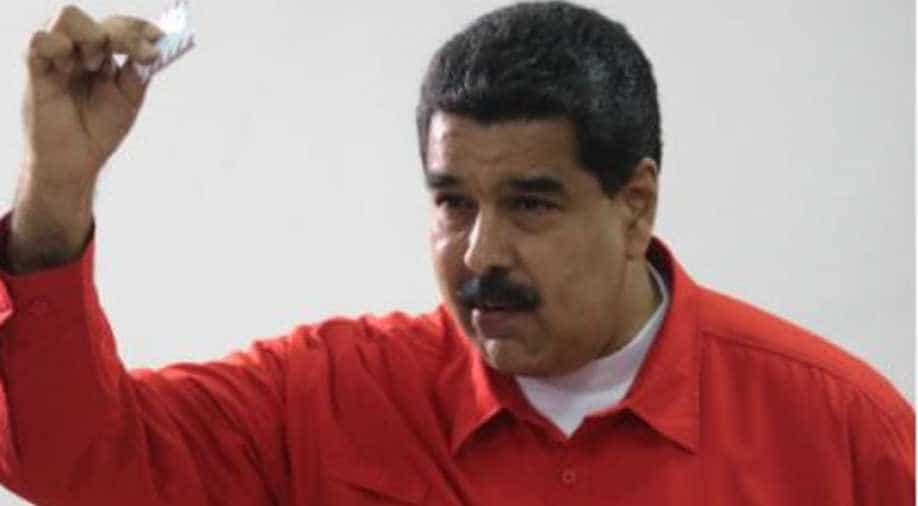 Venezuelan President Nicolas Maduro show his ballot as casts his vote at a polling station during the Constituent Assembly election in Caracas, Venezuela Photograph:( Reuters )

The United States hit Venezuelan President Nicolas Maduro with direct sanctions on Monday over a disputed and deadly weekend vote, calling him a "dictator," while the leader refused to heed what he slammed as "imperial orders."

The measures were unusual in that they targeted a sitting head of state, but their reach was mostly symbolic, freezing any US assets Maduro might have and banning people under US jurisdiction from dealing with him.

"Yesterday's illegitimate elections confirm that Maduro is a dictator who disregards the will of the Venezuelan people," US Treasury Secretary Steven Mnuchin told reporters.

Maduro lashed out at the move, saying it smacked of American imperialism.

"I will not obey imperial orders," he said.
"I am so proud, Mr. Donald Trump," Maduro joked in English, before switching to slang in Spanish: "Go for it, already. I am being targeted with sanctions because I do not obey the orders of foreign governments."

Colombia, Mexico, Peru and other nations joined the US in saying they did not recognise the results of Sunday's election, which appointed a new "Constituent Assembly" superseding Venezuela's legislative body, the opposition-controlled National Assembly.

Maduro's own attorney general, Luisa Ortega, who broke with him months ago over his policies, also said she would not acknowledge the body, calling it part of the president's "dictatorial ambition."
The European Union expressed "preoccupation for the fate of democracy in Venezuela" and said it, too, doubted it could accept the results.

And Britain's Foreign Minister Boris Johnson warned that Venezuela "stands on the brink of disaster."
"Nicolas Maduro's government must stop before it is too late," he said.

However, old allies Bolivia, Cuba, Nicaragua, and Russia stood by Maduro, who shrugged off mass protests and a previous round of US sanctions on some of his officials to see through the election.

Cuba, Venezuela's closest ally, charged that "a well-organised international operation was under way, led from Washington, with the support of the OAS chief, aimed at silencing the voice of the Venezuelan people, and forcing them into submission with attacks and economic sanctions."

The National Electoral Council claimed more than 40 per cent of Venezuela's 20 million voters had cast ballots on Sunday.

According to the opposition, voter turnout was closer to 12 per cent, a figure more aligned with the lack of lines at many polling stations.

Surveys by polling firm Datanalisis showed more than 70 per cent of Venezuelans opposed the new assembly.

Further protests were called for Monday and beyond, stoking fears that the death toll of 120 people killed in four months of protests against Maduro could rise further.

Demonstrators defied a ban on protests set by Maduro that threatened up to 10 years in prison for violators.

Ten people died in violence surrounding Sunday's election, which saw security forces fire tear gas and, in some cases, live ammunition to put down protests. Among those killed were two teens and a Venezuelan soldier.

Boycotted by the opposition, and voted for largely by state employees fearful for their jobs, the Constituent Assembly was made up solely of members of Maduro's ruling Socialist Party.

Tasked with writing a new constitution, it has far-reaching powers, including the right to dissolve the National Assembly and change laws.

It is due to be installed on Wednesday.

The European Union condemned the "excessive and disproportionate use of force" by Venezuelan police and troops on Sunday.

A spokeswoman for the European Commission said "A Constituent Assembly, elected under doubtful and often violent circumstances, cannot be part of the solution."

Russia, however, threw its weight behind Maduro and the election, backing the government turnout figure.
The foreign ministry in Moscow said in a statement it hopes countries "who apparently want to increase economic pressure on Caracas will display restraint and abandon their destructive plans."

Yet analysts agreed that Maduro's move had swept away any vestige of democracy in Venezuela.

"Maduro's blatant power grab removes any ambiguity about whether Venezuela is a democracy," said Michael Shifter, head of the Inter-American Dialogue research center.

Venezuela's 30 million citizens are suffering through shortages of basic goods.

Sanctions against the all-important oil sector would worsen their situation, but could also destabilize the government, which is frenziedly printing money and running out of foreign currency reserves.