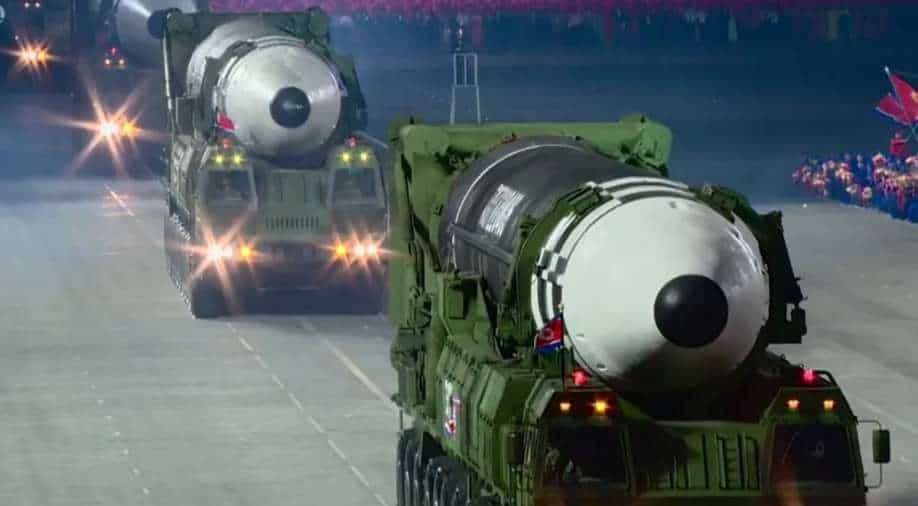 A screen grab taken from a KCNA broadcast in October 2020 of a North Korean ICBM display Photograph:( Reuters )

Air Force General Glen VanHerck made the remarks on Tuesday -- a day ahead of a debut trip by US President Joe Biden's top diplomat and defence secretary to South Korea.

North Korea might begin flight testing an improved design for its inter-continental ballistic missiles "in the near future," the head of the US military's Northern Command has said.

Air Force General Glen VanHerck made the remarks on Tuesday -- a day ahead of a debut trip by US President Joe Biden's top diplomat and defence secretary to South Korea.

The warning wasn't exactly based on specific intelligence about an imminent launch, but rather on North Korea's October unveiling at a parade of what would be its largest ICBM yet.

Even during the testing lull, North Korean leader Kim Jong Un has called for continued production of nuclear weapons for his arsenal, launched a series of smaller missiles and unveiled the ICBM.

The US general also noted that Kim released himself from a moratorium on testing over a year ago.

"The North Korean regime has also indicated that it is no longer bound by the unilateral nuclear and ICBM testing moratorium announced in 2018, suggesting that Kim Jong Un may begin flight testing an improved ICBM design in the near future," VanHerck said in his written testimony.

"It seems more likely that if North Korea is going to start testing missiles again, it will start with ones where testing has been almost normalised," Town said.

The White House on Monday confirmed a Reuters report that the Biden administration sought to reach out to North Korea but had received no response, extending a chill in relations that began at the end of Donald Trump's administration.

After the White House remarks, North Korean state news reported that the sister of the North Korean leader Kim Yo Jong, criticised the Biden Administration for ongoing military drills in South Korea.