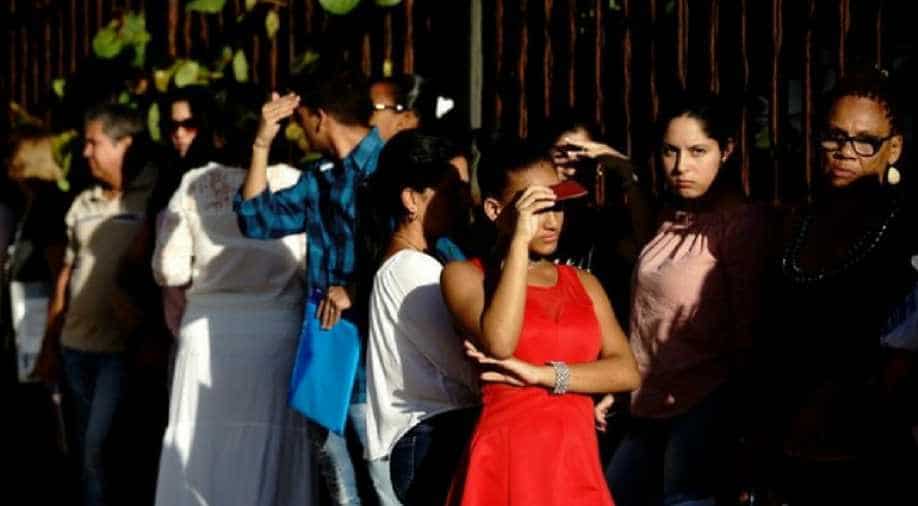 People wait in line to enter the US Embassy. Photograph:( Reuters )

The United States' ability to monitor Cuba, defend human rights, conduct consular activities and comply with bilateral agreements is being undermined by a drastic reduction in staff at the embassy in Havana, according to a congressional report.

The administration of President Donald Trump, which has partly rolled back Washington's detente with Cuba, has sharply reduced US staff in Havana and expelled 15 Cuban diplomats.

The document from the non-partisan Congressional Research Service (CRS) states that the decision to reduce staffing from more than 50 diplomats to a maximum of 18 - due to a mysterious illness that has affected 26 officials and family members - overwhelmed those remaining at their posts.

"Because of the reduction in US staff, US officials maintain that those officers at post often wear two or three hats in terms of responsibilities," read the report, issued at the request of New York Representative Eliot Engel, the ranking Democratic member of the House Foreign Affairs Committee.

While diplomatic and humanitarian visas are being granted, Americans in Cuba can only expect emergency services, the report said.

Outreach to civil society and human rights activists has also been reduced at a time when Cuba is transitioning to a new generation of political leaders, internet access is spreading and a revamped constitution is headed for a referendum vote.

The US State Department announced this month that the few remaining staff would be assigned for just a year instead of two, "making it difficult for the continuity of operations and familiarity with working in Cuba," the report stated.

The US Embassy in Havana was not immediately available for comment on the report.

Not a single refugee visa has been issued so far this year as the processing office is closed, the report noted. Often granted to government opponents claiming persecution, a total of 177 such visas were issued in 2017.

A 1994 agreement to accept 20,000 Cuban migrants annually will also not be met in 2018, according to the report, in part because applicants must travel to Guyana for interviews.

The Trump administration insists the current policy will remain in place until the mystery of the health problems among diplomatic staff, which it often refers to as "attacks," is solved.

Staff have suffered symptoms such as hearing loss, dizziness, fatigue and memory issues, according to the State Department.

Cuba, the United States and Canada - whose diplomats were also affected - have been investigating the incidents for 18 months. China has now joined the inquiry after a few US diplomats there came down with similar symptoms this year.

Paul Hare, a former British ambassador to Cuba who lectures at Boston University's Pardee School of Global Studies, said US staffing was enough to monitor Cuba, but not carry out more labor-intensive activities.

"Diplomacy is continuous and all problems are eventually resolved. Sooner or later this will be," he said. "But perhaps it suits the Trump administration not to engage with Cuba and to warn US visitors who go there that the normal consular protection services of an embassy may be hard to find," he said.