US Elections 2020: Quotes from Donald Trump and Joe Biden during the presidential debate 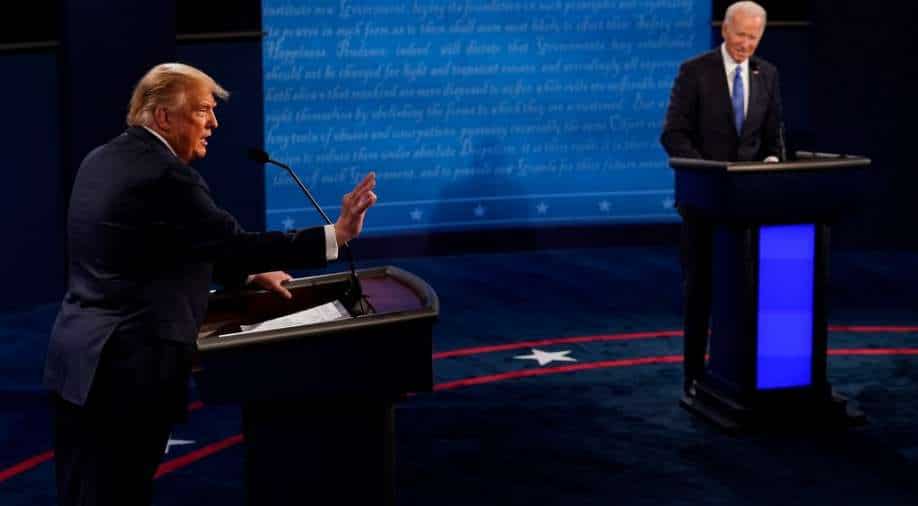 US President Donald Trump and Democratic challenger Joe Biden squared off against each other in second presidential debate on Friday. This was their last one-on-one debate before November 3 polls.

US President Donald Trump and Democratic challenger Joe Biden squared off against each other in second presidential debate on Friday. This was their last one-on-one debate before November 3 polls.

Here are some of the quotes from the presidential debate

Donald Trump on Dr Fauci: "I think he's a Democrat, but that's OK"

Donald Trump: "I don't know if we're going to have a dark winter, and at all. We're opening up our country. We've learned and studied and understand the disease."

On Russia and Iran

Donald Trump: "You are getting a lot of money from Russia. You owe an explanation to the American people, you have to clean it up,

Joe Biden: "I haven't taken a single penny from any foreign country whatsoever"

Donald Trump: "Joe got three and a half million dollars from Russia,"

Joe Biden: ""Russia does not want me to be elected,"

Donald Trump:  "Nobody is tougher on Russia than me,"

Donald Trump: "No matter how well you run (the Affordable Care Act), it's no good. What we'd like to do is terminate it. We have the individual mandate done. I don't know that it's going to work. If we don't win (in court) ... we'll have Obamacare but it will be better run."

Joe Biden: "We will make sure we reduce healthcare insurance premiums"

Joe BIden: "I am not against private insurance."

Joe Biden: "Healthcare is not a privilege, it's a right"

Donald Trump: "When I met with Obama, he said our biggest problem is North Korea. He indicated that we will have a war with North Korea. We have a different kind of relationship with the guy and there is no war. He is not going to do that,"

DonaldTrump: "You know what? North Korea - we're not in a war. We have a good relationship."

Joe Biden: "We had a good relationship with Hitler before he in fact invaded Europe. Come on."

Joe Biden: "There is institutional racism in America"

Donald Trump: "I am the least racist person in this room."

Joe Biden: "I did not say anything he is accusing me of"

Donald Trump: "Children are brought here by coyotes and lots of bad people, cartels..We let people in but they have to come in legally."

Joe Biden on children separated at the border: “It makes us a laughingstock and it violates every notion of who we are.”

Donald Trump: "We have the best carbon emission numbers we've had in 35 years under this administration. Look how 'filthy' are Russia and China, look at India...the air is so filthy".

Donald Trump: "We have done an incredible job environmentally"

Joe Biden: "Climate change global warming is existential threat to humanity. We have a moral obligation to deal with it"

Donald Trump: "I will not sacrifice tens and millions of jobs, thousands and thousands of companies because of the Paris accords,"