US election 2020: With 20 days to go, Trump offers kisses to his supporters at Florida rally 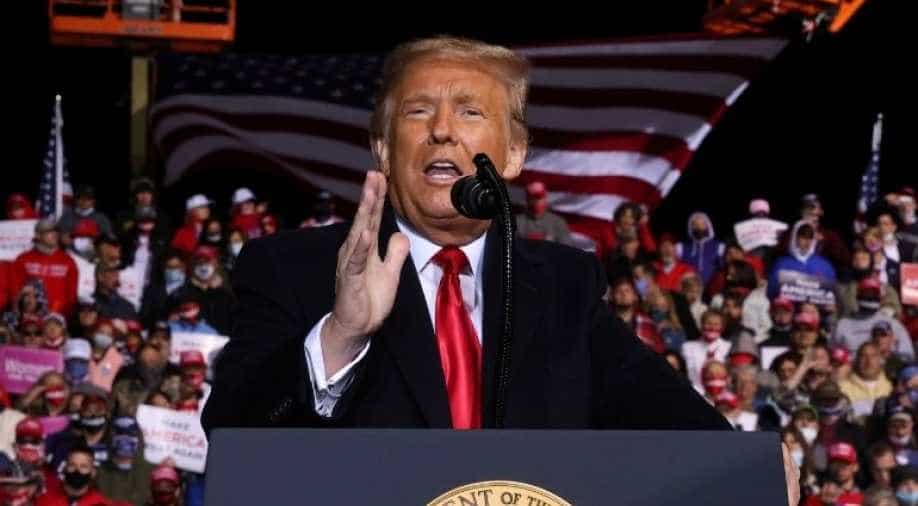 On November 3, the United States of America will vote in  one of the most bitterly contested election in recent history

US election 2020 - The US presidential polls are due in three weeks - 20 days precisely. On November 3, the United States of America will vote in  one of the most bitterly contested election in recent history.

Donald Trump wants to secure four more years at the White House. Trump says he has recovered from the coronavirus, or “kung flu" as he likes to call it.

Eager to prove himself healthy and lively despite days of hospitalisation, Trump has hit the campaign trail again.

On Tuesday, he made a grand return at a campaign rally in Orlando, Florida. Trump declared he was in perfect shape, and even tossed face masks into the audience. Additionally, he offered to give everyone a “big fat kiss”.

“I think this covid is all political. Just to make Trump look bad”, Sandra Colanese, a Trump supporter said.

“I think, I think the virus is been extremely politicated [sic]. It is, it is been used to lockdown this country, which is what'll happen if Joe Biden is reelected. They will lock down the nation,” another supporter said.

"I'm not concerned, I've been working all the time. Ain't got no covid. I take vitamins, I eat healthy, I just ain't worried about it”, Mark Nobel, another supporter of Trump said.

The US president is racing against the clock to make up for the time he lost after testing positive.

On October 14, Trump took his campaign to Pennsylvania - a battleground state that he had won by a narrow margin in 2016. Speaking in Johnstown, Pennsylvania, Trump declared how he did not care about being politically correct.

He also requested “suburban women” to like him. And once again offered to kiss everybody, every single man and woman in the audience.

“So can I ask you to do me a favour? Suburban women, would you please like me? (cheers) please. I saved your damn neighbourhood, ok?  The other thing, i don't have that much time to be that nice. You know, I can do it, but I got to go quickly”, Donald Trump said.

“… And now i'm immune, they tell me. I'm immune. I could come down and start kissing everybody. I'll kiss every guy, man and woman, man and woman. Look at that guy, how handsome he is. I'll kiss him. Not with a lot of enjoyment, but that's okay.”, the US president added.

Sometime later, the US president decided to dance to the 1978 mega-hit YMCA. Trump plans on holding many such electrifying rallies in the coming days - in Iowa, North Carolina, Wisconsin.

Joe Biden is insisting on a virtual debate, citing Trump's COVID-19 diagnosis. Trump, on the hand hand, is not too keen on the idea of a virtual debate.He wants the face off to be live and in-person.