US election 2020: The history and rules of poll watching 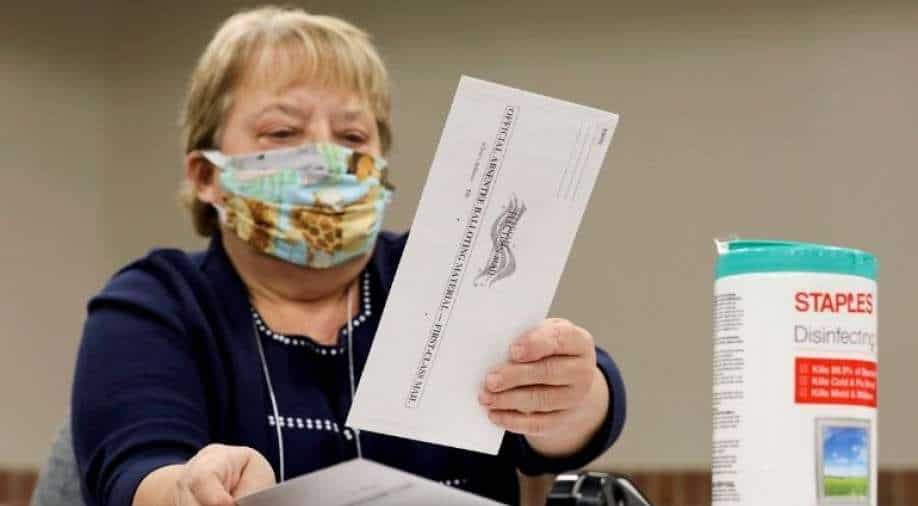 Election volunteer Nancy Gavney verifies voter and witness signatures on absentee ballots as they are counted at the City Hall during the presidential primary election held amid the coronavirus disease in Beloit, Wisconsin Photograph:( Reuters )

Raising worries about conceivable elector terrorising, Trump has been encouraging his allies to go the surveys and 'watch cautiously'

With less than a week to go for the final showdown between President Donald Trump and his Democratic challenger Joe Biden for the US election 2020, more than 70 million people have cast their ballots.

Raising worries about conceivable elector terrorising, Trump has been encouraging his allies to go the surveys and "watch cautiously".

The Republican presidential candidate has been telling his supporters that his re-election campaign will have people watching the polls "like crazy" on November 3.

"Both law enforcement and yourselves and everybody," he told a large crowd at an airport in Londonderry near the city of Manchester.

Republicans are mobilising thousands of volunteers to watch early voting sites and ballot drop boxes leading up to November's election, part of an effort to find evidence to back up Trump's unsubstantiated complaints about widespread voter fraud.

Some voting-rights activists are concerned such encounters could escalate in a tense year that has seen armed militias face off against protesters in the nation's streets.

Here's the historical backdrop of "survey viewing" and how the training may take on new importance in the midst of a flood in mail balloting prodded by the coronavirus pandemic and Republican President Donald Trump's unconfirmed cases that mail casting a ballot is filled with misrepresentation.

Also read: US election 2020: How are votes counted in the presidential election?

WHAT IS POLL WATCHING?

Survey watchers are essential for US races going back to the eighteenth century, with their exercises constrained by state laws and nearby principles. Individuals from the two players watch out for the democratic - and one another - to ensure things go easily.

State laws call eyewitnesses inside surveying places various things and appoint them various jobs. In certain spots, the survey "watchers" are not quite the same as "challengers," who can call attention to individuals they speculate aren't legitimate electors. In different states, survey watchers additionally do the difficult.

Then again different principles set limits on how close hardliner allies can remain outside surveying places, as they attempt to prepare to uphold for their applicants with signs, flyers, and other promoting.

Grumblings about excessively forceful survey watchers are normal. In some cases, spectators have utilized the capacity to challenge electors' capabilities in manners that oppress minorities, which has brought about some court activities to end those practices.

In a 1999 city political decision in Hamtramck, Michigan, for instance, challengers from a city bunch called "Residents for a Better Hamtramck" tested 40 Arab-Americans who had "brown complexion and particularly Arabic names," who were then constrained by political decision authorities to make a vow to demonstrate they were residents, as indicated by a US Equity Department assent order. The city consented to gather information laborers, and a government inspector was selected to regulate city decisions through 2003.

In 1981, a Republican activity put outfitted men in regalia decorated with "Voting form Security Task Force" outside surveying places in generally minority territories during a New Jersey state political decision. After that episode, the RNC consented to an assent order that restricted its polling form security tasks.

That declaration terminated in 2018 after a government judge declined Democratic endeavors to reestablish it.

This year points the principal official political race in almost forty years in which the RNC can take part in polling form security exercises without earlier audit and endorsement.

WHAT ARE THE RULES?

Guidelines on who can "watch" casting a ballot and the forces allowed these eyewitnesses, change from state to state. In Pennsylvania, for instance, survey watchers can watch the political decision - checking turnout and casting ballot machines - and furthermore challenge electors by taking their interests to political decision authorities. Nonetheless, these challenges for the most part are banished from collaborating straightforwardly with citizens, or from making meritless difficulties that hinder casting a ballot.

Capabilities for survey laborers likewise change. They regularly should be enrolled citizens; in certain states, they should be affirmed ahead of time by political race authorities. North Carolina necessitates that survey laborers be of "acceptable good character."

Eyewitnesses likewise are allowed by law in states that lead races generally via mail. In Oregon, for instance, the law says gatherings and competitors can support eyewitnesses to watch political race laborers open voting forms and tally them, however, these screens must carry on such that "won't meddle with an organized system."

Allies of gatherings and up-and-comers may remain outside surveying stations with flags and other political promoting, an action known as "electioneering." But that additionally is dependent upon laws that fluctuate from state to state.

For the most part, these supporters must keep specific good ways from the passage, so as not to pester or scare electors.

In Ohio, the fringe is 100 feet, and it should be set apart by two little American banners. In Florida and Georgia, the limit is 150 feet.

WHAT IS DIFFERENT ABOUT THIS YEAR?

The COVID-19 pandemic methods uncommon quantities of Americans will cast a ballot via mail and not face to face in 2020.

President Trump has made unwarranted cases that these polling forms will be polluted by extortion. His mission is trying to select a huge number of volunteers to search for anomalies, for example, individuals dropping off more than one voting form in states like Pennsylvania where that, by and large, isn't permitted.

This exertion is trying democratic laws planned around the face to face balloting on Election Day, political race specialists said. There is no rulebook for screens attempting to enter early surveying destinations, or conceivably testing citizens in open who are attempting to drop off their polling forms, said Terry Madonna, a political theory teacher at Franklin and Marshall College in Pennsylvania.

This current fall's political race will be the first in almost 40 years where the Republican National Committee will be free from an assent order that confined its capacity to take part in facilitated survey watching exercises. Leftists are worried that could open the entryway for Republicans to take part in a similar sort of elector terrorizing that brought about the assent order in any case in the mid-1980s.

In a year that has seen equipped civilian armies stand up to protestors, some democratic rights advocates are anxious about the arrival of firearm hauling bunches appearing outside surveying places.

Some landmark states, including Pennsylvania, Michigan, North Carolina, Wisconsin, and Virginia, are purported open-convey states where residents can convey firearms straightforwardly in broad daylight. There are no laws on the books in those states unequivocally denying individuals from conveying guns into surveying places.

All things considered, state and government laws make it unlawful for anybody to attempt to scare citizens.

Casting a ballot rights associations to state they will have a large number of legal counselors remaining by who might mediate with nearby authorities or look for court requests to stop such movement.