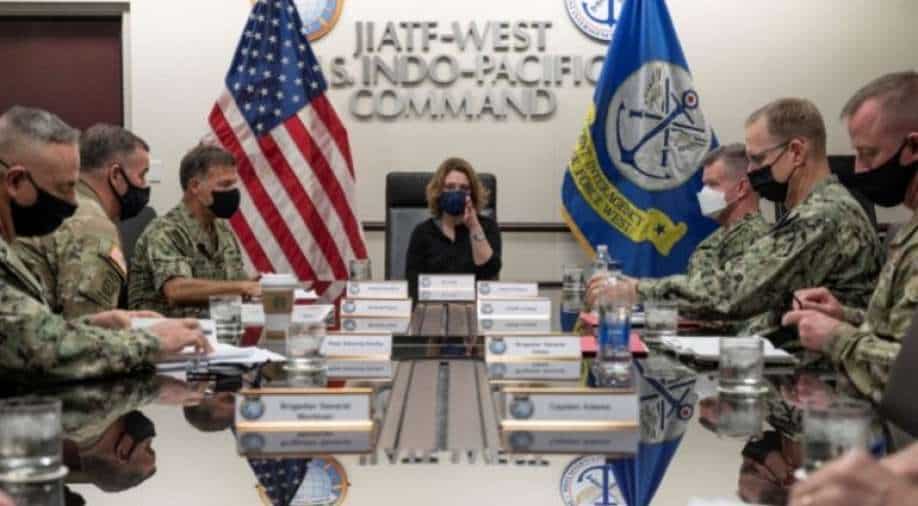 On Tuesday, Deputy Secretary of Defense Kathleen Hicks visited the United States Indo-Pacific Command in Hawaii, where she was briefed on this new tool. Photograph:( Reuters )

US military commanders in the Pacific have developed a software tool that can predict how the Chinese government will react to US-backed activities in the region such as military sales, other military activity and even congressional visits to hotspots like Taiwan.

On Tuesday, Deputy Secretary of Defense Kathleen Hicks visited the United States Indo-Pacific Command in Hawaii, where she was briefed on this new tool.

Also read | While US was hosting democracy summit, China targeted our allies: Taiwan

An official with the Defense Department said the tool calculates "strategic friction." It analyzes data since early 2020 and looks at significant activities that affected US-Sino relations.

The computer-based system will allow the Pentagon to predict whether certain actions will provoke an "outsized reaction" or an overreaction from the Chinese side.

As recently as October, the Chinese military warned that the United States and Canada were threatening peace and stability in the Taiwan Strait by sending warships through the strait.

An official from the US said this incident and others like it have fueled demand for this tool, which will help ensure the United States does not unintentionally upset China with its actions.

US-China relations are already at a low point, but the tool provides visibility across a variety of activities such as congressional visits to Taiwan and arms sales to allies in the region. It can also point out when US ships crossing the Taiwan Strait might provoke an unintended reaction from China.

Watch | Gravitas: From Iraq to Afghanistan: America's trail of deaths

The People's Republic of China claims democratically ruled Taiwan as its territory and has undertaken repeated air force missions into Taiwan's air defense identification zone (ADIZ) over the past year, provoking anger in Taipei.

This newly developed software will enhance the ability of US officials to plan actions as early as four months in advance, the official said.