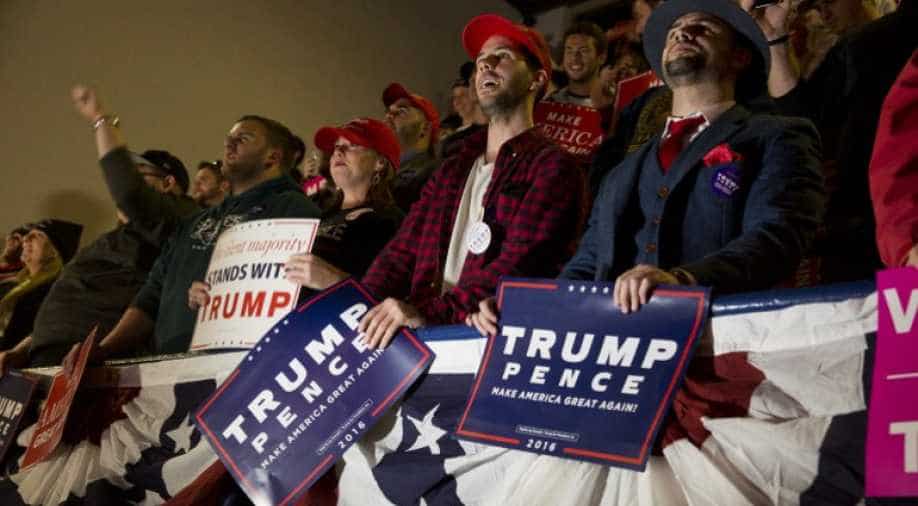 The Trump campaign appealed and won, with the Sixth Circuit US Court of Appeals in Cincinnati on Sunday suspending Gwin's order, saying the Ohio Democratic Party had not sufficiently substantiated their arguments. Photograph:( AFP )

The US Supreme Court on Monday rejected an 11th-hour move by the Democratic Party in Ohio seeking to prevent Donald Trump supporters from carrying out certain actions that could be considered voter intimidation.

The legal battle, followed across the country because of its potential implications, had stemmed from Trump's assertions on the campaign trail, without providing evidence, that the election was likely to be "rigged" and that his supporters should watch polling sites on Tuesday.

Fearing this call would lead to Trump supporters intimidating voters, particularly minorities who are more likely to support Democrat Hillary Clinton, the Ohio Democratic Party filed a lawsuit and initially won their case in federal court on Friday.

US District Judge James Gwin had issued a ruling barring activities including following, questioning or photographing voters or their vehicles.

The Trump campaign appealed and won, with the Sixth Circuit US Court of Appeals in Cincinnati on Sunday suspending Gwin's order, saying the Ohio Democratic Party had not sufficiently substantiated their arguments.

On Monday, the shorthanded Supreme Court, with eight justices instead of the usual nine as Republicans have blocked President Barack Obama's nominee to replace the late conservative justice Antonin Scalia, sided with the appeals court.

In keeping with protocol, the high court is reluctant to intervene just before a national election.

Supreme Court Justice Ruth Bader Ginsburg said in a statement that she voted to deny the Democratic party's case because Ohio already has laws in place to stymie voter intimidation.

Trying to block or harass voters at the polls harkens back to the intimidation of black voters in modern US history, especially in the formerly segregated South.

After a bruising presidential campaign that has divided the country, thousands of independent observers will be fanning out Tuesday to ensure free and fair polling.

The US Justice Department said it would send more than 500 people to 28 states to observe the voting.