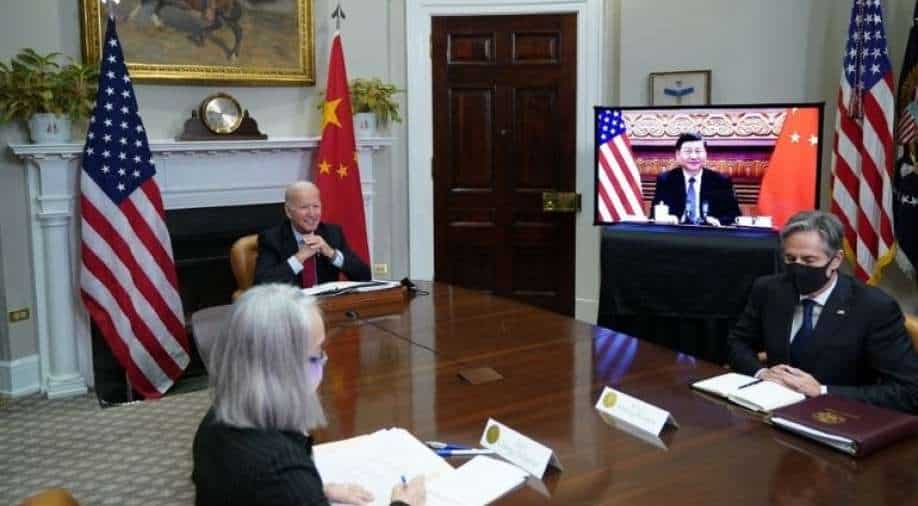 Biden said China and US must create 'guardrails' so that competition does not veer into conflict, whether intended or unintended

On Monday, US President Joe Biden and Chinese President Xi Jinping opened a virtual summit, calling for more communication between the superpowers and "guardrails" to prevent a conflict.

Biden said they must create "guardrails" so that the competition between the two countries does not veer into conflict, whether intended or unintended. They would have a "candid" discussion, he added.

Referring to Biden as his "old friend," Beijing's Xi said the rivals must work more closely. "China and the United States need to increase communication and cooperation," he said.

"A sound and steady China-US relationship is required for advancing our two countries’ respective development and for safeguarding a peaceful and stable international environment, including finding effective responses to global challenges such as climate change, which you referenced, and the COVID pandemic."

Jen Psaki, White House spokeswoman, said Biden was going into the summit, "from a position of strength." and after months of building alliances with other democracies to contain China.

In Psaki's words, the meeting is "an opportunity to set the terms of competition with China" and to insist Beijing "play by the rules of the road."

In the lead up to the meeting, most attention was focused on the dispute over Taiwan, a self-governing democracy claimed by China with Biden's advisers looking at the summit as a chance to prevent tensions from escalating.

During Donald Trump's presidency, relations between the two superpowers deteriorated, as the president launched a trade war with China and denounced Beijing's response to an international probe into the origins of the Covid pandemic in Wuhan, China.

According to Biden, the confrontation is a contest between democracy and autocracy.

Despite a more measured tone than during the Trump era, tension over Taiwan threatens to escalate into a more dangerous situation.

Recent years have seen an increase in Chinese military activity near Taiwan, with a record number of Beijing's warplanes breaching the air defence zone of the island last October.

Although the United States says it supports Taiwan's self-defence, it is ambiguous about whether the country will intervene directly.

In a phone call with US Secretary of State Antony Blinken, Chinese Foreign Minister Wang Yi said that "any connivance of and support for the 'Taiwan independence' forces undermines peace across the Taiwan Strait and would only boomerang in the end,"

China's foreign ministry on Monday put the onus on Biden to improve relations.

"We hope that the US will work in the same direction as China to get along with each other," foreign ministry spokesman Zhao Lijian told reporters.

According to a US administration official, Biden will be "very direct" on China's "coercive and provocative behavior with respect to Taiwan."

However, the official also said that the two countries could cooperate in many different areas, such as climate change.