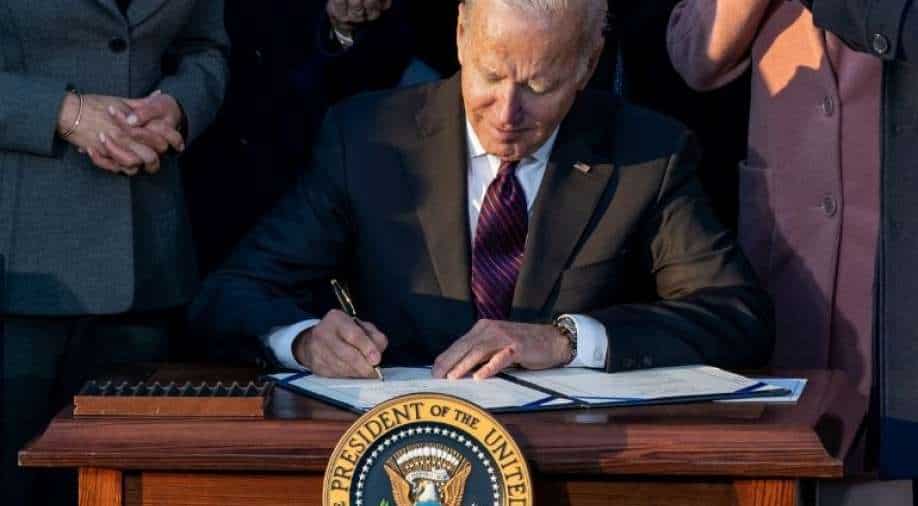 Biden had to rack up months of negotiating with his fractious Democratic Party to get them to vote, running the risk of a humiliating defeat

Amid heavy criticism and a bleak outlook from opinion polls, President Joe Biden signed into law the largest US infrastructure overhaul in more than half a century on Monday at a rare bipartisan celebration in the White House.

A government investment of this magnitude hasn't been seen since the national highway system was built in the 1950s.

"So my message to the American people is this: America is moving again and your life is going to change for the better."

The bill is "proof that Democrats and Republicans can come together to deliver results," Biden said. "Let's believe in one another and let's believe in America."

Spending on infrastructure is popular, but Biden's predecessor, Donald Trump was unsuccessful at achieving the goal for four years, making promises of an upcoming "infrastructure week" a running joke.

Even now, Biden had to rack up months of negotiating with his fractious Democratic Party to get them to vote, running the risk of a humiliating defeat.

In a bitterly divided Congress, Democrats control only a narrow majority, but in a rare moment of cooperation, a substantial number of Republicans in the Senate joined them along with a symbolic handful in the House.

"We agreed this would be a truly bipartisan process," Senator Rob Portman, a Republican from Ohio, told the White House gathering. "This should be the beginning of a renewed effort to work together on big issues facing our country."

However, there is a possibility that this feel-good moment will not last.

Biden's approval ratings are on the decline, with the latest Washington Post-ABC poll showing just 41 per cent approval. It is most concerning for the White House that support is ebbing away not only among independent voters but also within the Democratic Party itself.

In spite of the outreach by some Republicans, the majority of the opposition party has little interest in declaring a truce.

In a scathing attack against the 13 Republicans in the House who voted alongside the Democrats, Trump said Republicans who crossed the aisle should be "ashamed" and are not real Republicans.

The hard-right Republican representative Marjorie Taylor Greene, particularly vocal in her support for Trump, called the 13 fellow Republicans "traitors." She tweeted out the office phone numbers of the fellow Republicans, some of whom reported receiving torrents of violent abuse.

"These are the 13 ‘Republicans’ who handed over their voting cards to Nancy Pelosi to pass Joe Biden’s Communist takeover of America via so-called infrastructure" she had said in the since-deleted tweet.

However, the White House hopes the bill signing will give a boost to Biden, who holds a video link meeting with Xi Jinping today.

The $1.75 trillion package for childcare, education, and other social spending that Biden describes as a historic effort to eliminate social inequalities is still pending.

The proposal is being held up by internal party disagreements and has zero Republican support. Nancy Pelosi, the Democratic House Speaker, told the White House gathering that she hopes the bill will be passed this week.