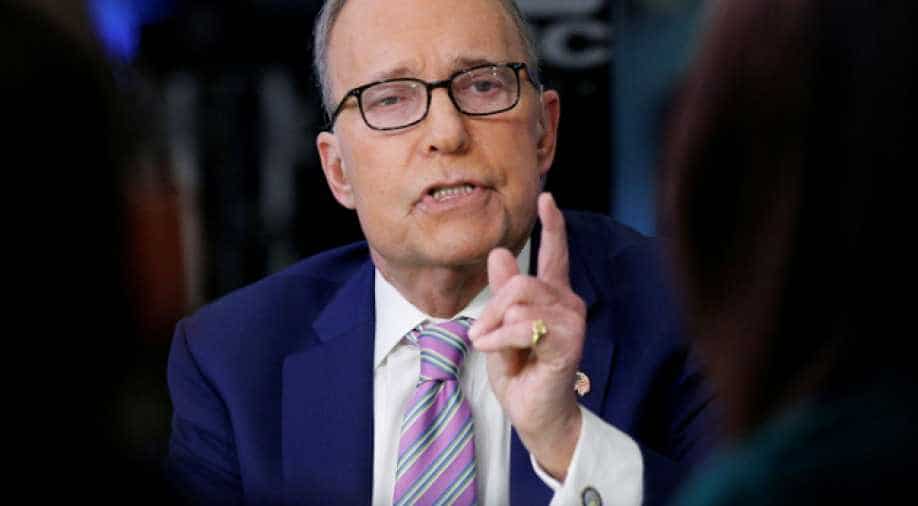 Kudlow said that although the United States and China have been negotiating on trade and intellectual property issues for 18 months, that was a short period of time in terms of what was at stake and negotiations could go on much longer.

White House economic adviser Larry Kudlow said on Friday the United States wants "near term" results from the US, China trade talks in September and October but cautioned that the trade conflict could take years to resolve.

Speaking to reporters outside the White House, Kudlow said that although the United States and China have been negotiating on trade and intellectual property issues for 18 months, that was a short period of time in terms of what was at stake and negotiations could go on much longer.

"A deal of this size and scope and central global importance, I don't think 18 months is a very long time," Kudlow said.

"The stakes are so high, we have to get it right, and if that takes a decade, so be it," Kudlow added, drawing parallels to US Cold War competition against the Soviet Union.

But in confirming talks between the high-level US and Chinese officials in early October, Kudlow declined to predict outcomes or a specific timeline for reaching any agreements.

The plans for the first in-person US and China trade meetings since late July were set during a phone call on Thursday between Chinese Vice Premier Liu He, US Trade Representative Robert Lighthizer and Treasury Secretary Steven Mnuchin. Trade deputies are due to meet in mid-September.

The 14-month US and China trade war has escalated sharply since May when talks broke down after Beijing backtracked on earlier commitments to make changes in the law to improve intellectual property protections, curb the forced transfer of US technology to Chinese firms and improve the US access to Chinese markets.

Since then, US President Donald Trump has sharply increased existing tariffs on $200 billion worth of Chinese goods and imposed or scheduled new tariffs on virtually all remaining imports from China to increase his negotiating leverage.

Kudlow told Bloomberg TV that he could not speculate on whether the September or October talks could delay a planned tariff increase on October 1 to 30 per cent from 25 per cent on $250 billion worth of Chinese goods.

"We would like to go back to where we were last May, but I don't know if that's possible, and I don't want to predict any outcomes. This is a difficult matter," told reporters at the White House.

He also said that it was important that Chinese reforms be reflected in changes to its laws and that any deal must have enforcement provisions to ensure that China lives up to its commitments.

He said on Fox Business Network that the September and October talks would cover all of the core issues in the dispute.

"Everything will be on the table. You can rest assured, for example, the absolute key structural issues the IP theft, the forced transfer of technology, the cyberspace, the clouds, financial services, all of that will be on the table agriculture purchases, industrial purchases, energy purchases, getting tariff and non-tariff barriers down," Kudlow said.

While there were no precondition talks, Kudlow told Bloomberg TV that the Trump administration wants "to see results in the near term."

"When we don't see results, we take additional actions," Kudlow said. "On the other hand, if we do see results from these upcoming meetings, then progress will be made."

Trump said on Twitter that China was hurting economically from the US tariffs but that the new round of talks was positive.

"'China is eating the Tariffs,'" Trump tweeted. "Billions pouring into the USA. Targeted Patriot Farmers getting massive Dollars from the incoming Tariffs!

Good Jobs Numbers, No Inflation(Fed). China having the worst year in decades. Talks happening, good for all!"