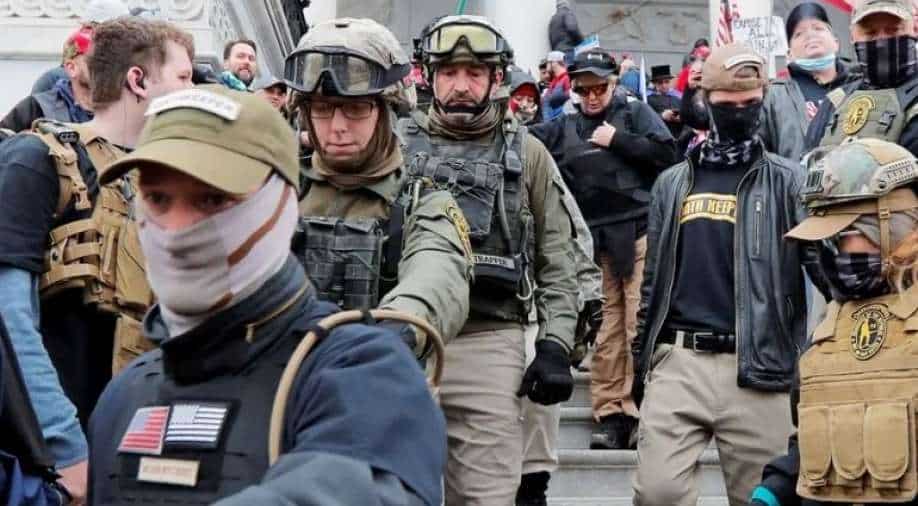 Oath Keepers is an extremist, far-right, anti-government militia organisation formed by members of current and former military and police forces

After more than a month of the Capitol riots, the US Justice Department is still trying to rightly punish the people involved in the damage of federal property and threatening the lives of Senators.

Added to the previous cases, the US Justice Department has charged six more 'Oath Keepers' for actively taking part in the Capitol riots that took place on January 06.

Oath Keepers is an extremist, far-right, anti-government militia organisation formed by members of current and former military and police forces. With the motto of 'Not on our watch', the group showed active involvement in the Capitol riots.

The members charged are supporters of the disgraced former US President Donald Trump and involve Graydon Young, 54 and married couple Kelly Meggs, 52, and Connie Meggs, 59. Young's sister Laura Steele, 52, from North Carolina, was also charged for the same along with Ohioans Sandra Ruth Parker, 62, and Bennie Alvin Parker, 70.

As per the indictment, Kelly Meggs, the head of the Florida chapter of Oath Keepers, wrote in a Facebook message post, "Trump said It's gonna be wild!!!!!!! It's gonna be wild!!!!!!! He wants us to make it WILD that's what he's saying. He called us all to the Capitol and wants us to make it wild!!! Sir Yes Sir!!! Gentlemen we are heading to DC pack you s***!!"

The US Justice Department is making all considerations to find and charge the Trump supporters involved in these riots, which injured several and left six dead.

In addition to this, so far 229 people have been charged over the January 06 riots and six officers from the Capitol Police, too, have been suspended while 29 have been put under investigation due to their behaviour during the riots.