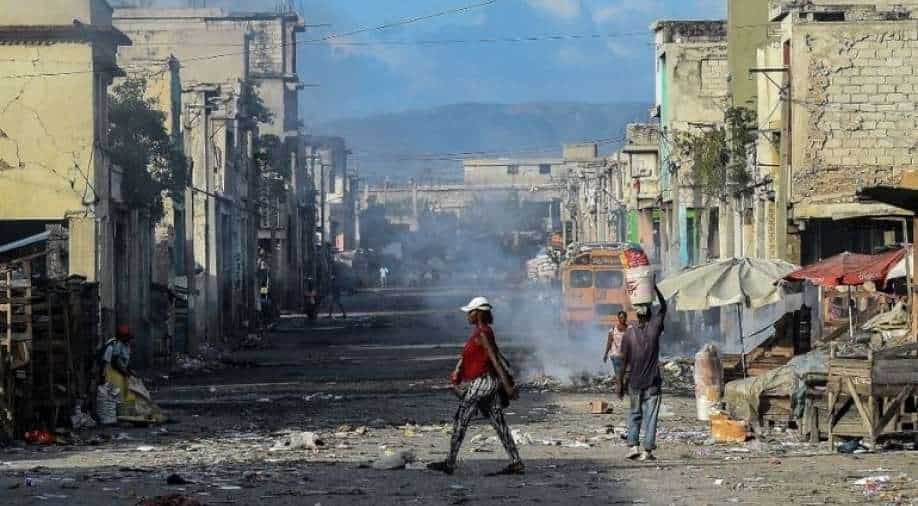 People walk on the deserted road ahead of gang shootings in downtown in Port-au-Prince. (File photo) Photograph:( AFP )

The missionary group, including children and one Canadian, was traveling in several vehicles when stopped by members of a criminal gang some 30 kilometers (20 miles) east of the capital, a Haitian security source told AFP

There has been little official reaction in Haiti, and local police did not immediately respond to an AFP request for comment.

But civil groups called Sunday for the immediate release of the group of 17 missionaries, family members and staff abducted a day earlier while returning from an orphanage visit.

"We call for the liberation of the persons kidnapped, whether American citizens or of other nationalities," said Gedeon Jean, director of the Center for Analysis and Research in Human Rights, based in the capital Port-au-Prince. He said the current situation was "detrimental to human dignity."

The missionary group, including children and one Canadian, was traveling in several vehicles when stopped by members of a criminal gang some 30 kilometers (20 miles) east of the capital, a Haitian security source told AFP.

One member of the group posted a desperate call for help in a WhatsApp group even as the attack unfolded, The Washington Post reported. "Please pray for us!!" the message read. "We are being held hostage, they kidnapped our driver. Pray pray pray. We don't know where they are taking us."

The Ohio-based Christian Aid Ministries said the group of 16 US citizens and one Canadian included five men, seven women and five children.

"Join us in praying for those who are being held hostage, the kidnappers, and the families, friends, and churches of those affected," the group said in a statement. "Pray for those who are seeking God’s direction and making decisions regarding this matter."

The abduction was the work of the so-called "400 Mawozo" gang, which for months has carried out kidnappings and robberies in the area between Port-au-Prince and the Dominican Republic border, said a Haitian security source, who spoke on grounds of anonymity.

The gang has hijacked several vehicles -- even entire busloads of victims -- on roads it controls, kidnapping both Haitians and foreigners and holding them for ransoms often many times a Haitian's yearly earnings.

Such armed gangs have been steadily extending their reach, taking advantage of spreading insecurity and a political crisis aggravated by the assassination in July of President Jovenel Moise.

"The police have proven incapable of confronting the gangs, which have become better organized and which control more and more territory" around the capital and in provincial cities, Gedeon Jean said.

His group has tallied an alarming increase in kidnappings in Haiti: more than 600 occurred in the first three months of 2021, up sharply from 231 in the corresponding period of 2020.

The US State Department offered no details on the situation.

A spokesperson said only: "The welfare and safety of US citizens abroad is one of the highest priorities of the Department of State.

"We are aware of these reports and have nothing additional to offer at this time."

Officials are typically close-mouthed about abductions, given the extraordinary sensitivity of such situations.

The State Department had issued a "Level 4: Do Not Travel" advisory for Haiti in August due to "kidnapping, crime, civil unrest, and COVID-19."

"Kidnapping is widespread and victims regularly include US citizens," the advisory warned.

In April, the Mawozo group held 10 people, including two French Catholic clergy members, for 20 days before releasing them.

Haiti has struggled for years with natural and man-made challenges that have fueled disorder and paralyzed economic growth.

Barely a month after Moise's assassination in the presidential residence, an August 14 earthquake killed more than 2,200 people in the southwest.

Gedeon Jean said the absence of a strong state has left a void that criminal gangs have moved to fill, extending their hold from some of the capital's poorest districts into surrounding areas.

Even before Saturday's kidnappings, business and professional groups in Port-au-Prince had called for an indefinite strike beginning Monday to protest the spreading climate of insecurity.