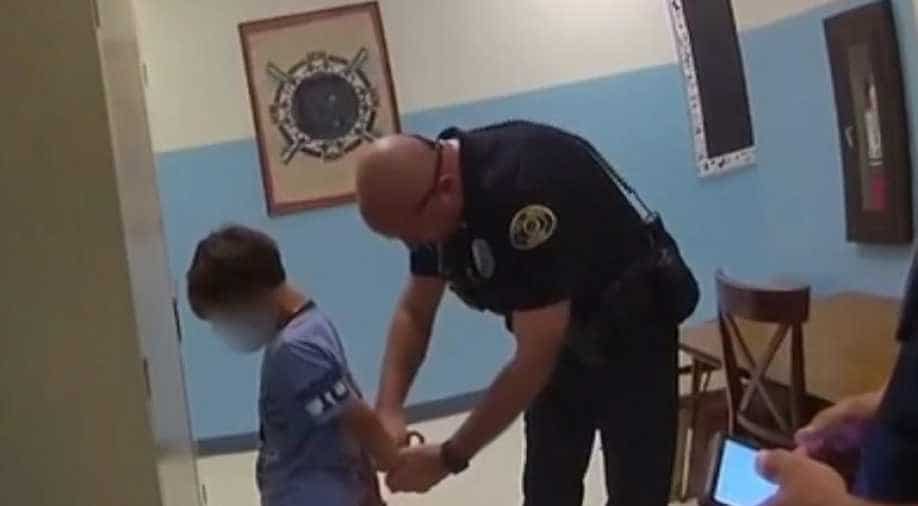 A still from a bodycam footage shows the 8-year-old boy from Florida being frisked by police Photograph:( Twitter )

The mother of the little boy, Bianca N. Digennaro, has filed a federal civil rights lawsuit over the incident.

Florida's Key West police arrested an 8-year-old boy with disabilities from his elementary school on a felony battery charge in December 2018, only to realize the boy's wrists were too small for the handcuffs.

The mother of the little boy, Bianca N. Digennaro, has filed a federal civil rights lawsuit over the incident. She believes her son was arrested and almost handcuffed after experiencing a mental health crisis at school. He has been diagnosed with oppositional defiant disorder, depression, anxiety, and ADHD.

“I refuse to let them make him a criminal,” she said in a press conference Tuesday.

Part of body-camera footage was released on Monday by civil rights attorney Ben Crump, who is representing the boy's mother.

In the clip police officers can be seen making statments such as “You understand this is very serious, OK?” and “You know where you’re going? You’re going to jail.”

Unbelievable!! @KWPOLICE used “scared straight” tactics on 8yo boy with special needs. He's 3.5 ft tall and 64 lbs, but they thought it was appropriate to handcuff and transport him to an adult prison for processing!! He was so small the cuffs fell off his wrists! pic.twitter.com/iSTlXdKas6

The officer then instructs him to stand up and place his hands on a metal cabinet in the hallway of his elementary school for a pat-down. Quivering with tears, the boy puts his hands behind his back, but his wrists are so slight that the handcuffs keep slipping off.

Abandoning the cuffs, the officer tells the boy to put his hands in front of him as they escort him to the police car parked outside.

The case had been dismissed after a mental health evaluation was conducted on the boy, in conjunction with his attorney, and that determined it was in the child's best interest to dismiss the charges, based on the boy's age and mental evaluation.

The Key West Police Department defended the conduct of its officers in a brief statement.

“Based on the report, standard operating procedures were followed,” Key West Police Chief Sean T. Brandenburg said in a statement.

The two-minute clip had racked up more than 2 million views as of early Tuesday.