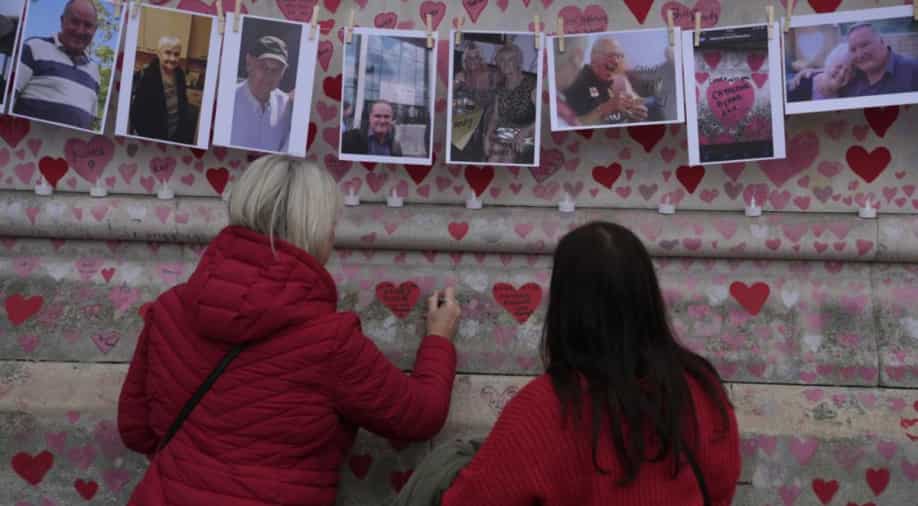 Family members write a message to two sisters who died of COVID on the National Covid Memorial wall in London Photograph:( AFP )

The increase, which was likely caused by infections from Omicron variants BA.4 and BA.5, was reflected in England, Wales, Northern Ireland, and Scotland in the most recent week

The latest estimates from the Office for National Statistics (ONS) have shown that coronavirus infections are rising again to one in 50 people in the United Kingdom.

A live roundup of the latest data and trends from the ONS reflected that coronavirus cases have soared 40 per cent in seven days with experts warning about that the resurgence of the virus could add to travel chaos and disrupt hospitals.

The increase, which was likely caused by infections from Omicron variants BA.4 and BA.5, was reflected in England, Wales, Northern Ireland, and Scotland in the most recent week.

It comes after the first peer-reviewed study of its kind from the United Kingdom showed that the Omicron variant of coronavirus is less likely to cause long COVID than previous variants.

With scientists saying they were able to dodge antibodies from earlier infection, the two subvariants of the highly contagious Covid-19 strain have spread recently, according to a report from UK’s Health Security Agency released last week.

It had said that “Although the number of total genomes is small, the apparent geographic spread suggests that the variant is transmitting successfully.”

Omicron sub-variant BA.4 and BA.5, which were first detected in South Africa, represent nearly 90 per cent of new COVID-19 infections in Portual, according to public health institute's Ricardo Jorge.

News agency Reuters reported that the World Health Organization said began tracking BA.4 and BA.5 because of they have new mutations “that need to be further studied to understand their impact on immune escape potential.”

According to a WHO report, both subvariants have additional mutations in the spike region, a part of the virus that is used to invade human cells, and unique mutations outside of that region.