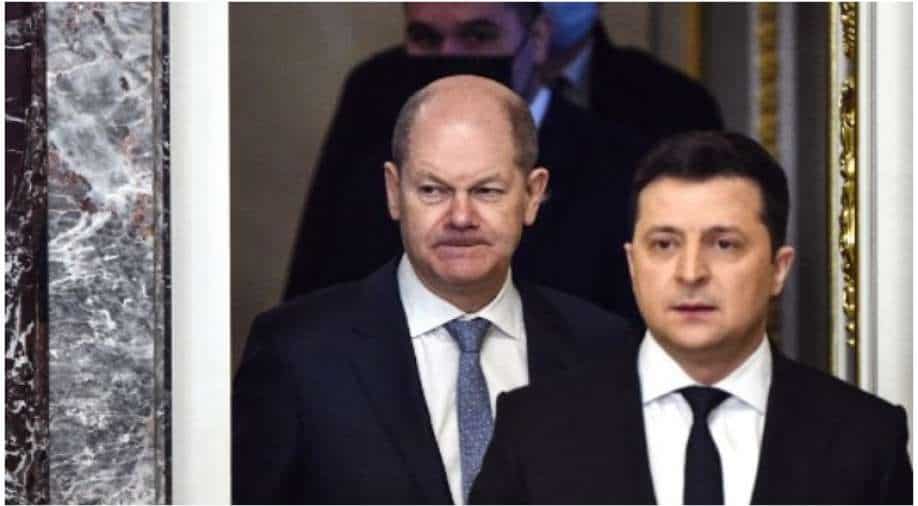 Ukrainian President Volodymyr Zelenskiy on Monday indicated, but in an indirect way, that Ukraine would continue to pursue its goal of seeking membership of North Atlantic Treaty Organisation (NATO). Russia is fiercely against Ukraine's (former Soviet country) inclusion in NATO. Zelenskiy was speaking in a joint press conference with German Chancellor Olaf Scholz in Ukrainian capital Kyiv.

Ukraine's envoy to Britain had suggested Kyiv may reconsider its NATO bid but later backtracked while acknowledging concessions could be on offer amid Western warnings of a potentially imminent Russian invasion.

Russia, which continues to maintain a militaery presence of more than 100,000 troops near Ukraine has sought guarantees from the West that Ukraine would never join NATO.

"Today, many journalists and many leaders are hinting a little to Ukraine that it is possible not to take risks, not to constantly raise the issue of future membership in the alliance, because these risks are associated with the reaction of the Russian Federation," said Zelenskiy at a joint news conference with Germany's Chancellor Olaf Scholz in Kyiv.

"I believe that we should move along the path we have chosen."

Olaf Scholz is in Ukraine as part of hurried diplomatic efforts to avoid war on European soil. On Tuesday (February 15) he will fly to Moscow for talks with the Russian side.

Scholz said it was strange Russia should raise this issue anyhow given it was not immediately on the agenda.

He told reporters he saw "no reasonable justification" for Russia's border buildup, and that Moscow should accept offers to discuss European security.

Scholz's trip was part of a flurry of diplomacy to de-escalate the crisis through dialogue and the threat of sanctions. On Tuesday, Scholz will fly to Moscow to meet Russian President Vladimir Putin.

The chancellor has ratcheted up engagement in the Ukraine crisis over the past week after critics accused him of lack of leadership and mixed signals in one of Europe's worst security crises in decades.

"Germany stands right by your side," he said on Monday, underscoring that the country was Ukraine's biggest financial backer and announcing a new credit of 150 million euros ($170 million).

Ukrainian officials have publicly criticized Germany for refusing to sell weapons to Kyiv - Berlin argues it cannot due to its bloody 20th century history - and over reluctance to pull the plug on a controversial Russian-German gas pipeline project.

Ukraine as well as Western allies argue the Nord Stream 2 pipeline, which is built but not yet operational, would enable Russia to cut Ukraine out of Europe's energy supply and make it more vulnerable to Russian invasion.