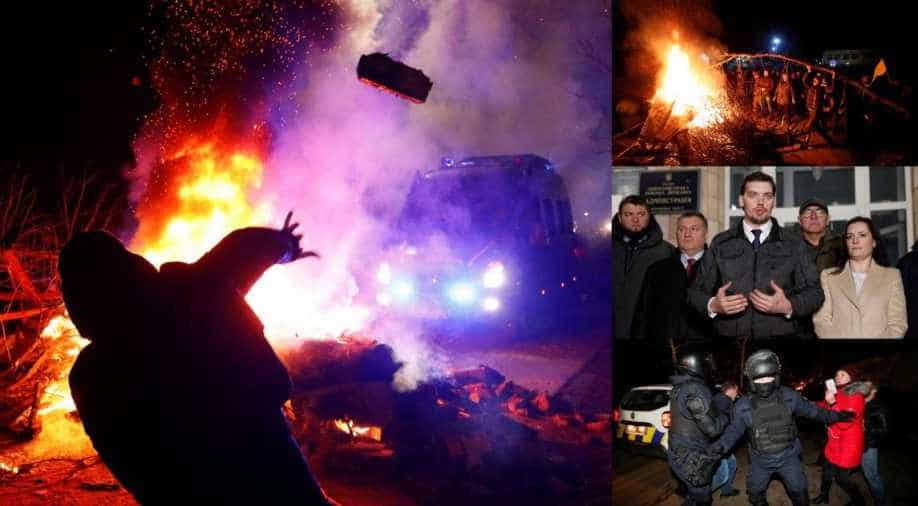 A violent welcome for coronavirus evacuees in Ukraine Photograph:( Reuters )

On Thursday, protesters had blocked roads and hurled stones at vehicles carrying 72 people evacuated from China and bound for a medical facility in the town of Novi Sanzhary in the central Poltava region.

Ukraine's health minister volunteered to spend two weeks in quarantine as authorities looked to ease panic Friday after protesters attacked buses carrying evacuees from coronavirus-hit China.
On Thursday, protesters had blocked roads and hurled stones at vehicles carrying 72 people evacuated from China and bound for a medical facility in the town of Novi Sanzhary in the central Poltava region.

Protesters said they feared the evacuees would be carrying the virus and threatening their community.
Riot police with armoured vehicles moved in to disperse the protesters, sparking clashes that injured nine policemen and one civilian.
Authorities called for calm, with senior officials rushing to the town and President Volodymyr Zelensky urging solidarity.
In a bid to allay fears, Health Minister Zoryana Skaletska said she would be joining the evacuees, who include 45 Ukrainians and 27 foreigners, in quarantine.

"I will spend the next 14 days with them, in the same premises, under the same conditions," she said.

"These people are our compatriots... We live in one country and have to take care of their health and safety."
Zelensky said "unprecedented" measures had been taken to prevent the spread of the virus across Ukraine.
He also urged Ukrainians to refrain from staging protests.
"Most of the passengers are people under 30. They are almost like children to many of us," Zelensky said.
"But there is another danger that I would like to mention. The danger of forgetting that we are all human and we are all Ukrainians," he said.
The interior ministry said it had beefed up security in the town of 10,000 people, with some 200 police on patrol around the medical facility where the evacuees would be under quarantine.
Ukraine has not confirmed any cases of the new coronavirus, which has killed more than 2,200 people and infected over 75,000 in China and 1,100 abroad.
Interior Minister Arsen Avakov said the evacuees had been checked by Chinese and Ukrainian doctors and showed no symptoms.
"Let's be a little more noble and generous," he said.
Protesters had said the evacuees should be quarantined away from populated areas, instead of in a facility in their community.