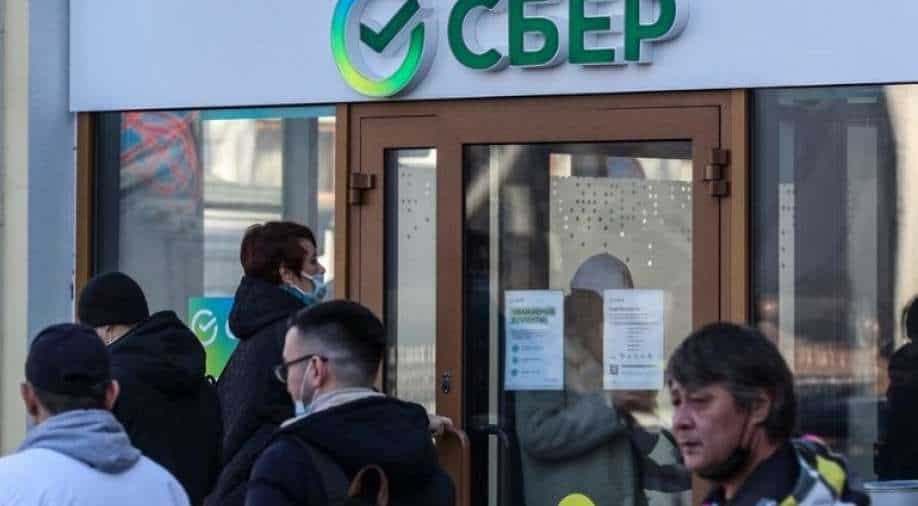 Customers lined up at a Sberbank ATM in Kramatorsk, Ukraine, amid the Russian invasion Photograph:( AFP )

Leading Russian bank Sberbank announced Wednesday it is pulling out of European markets amid tightening Western sanctions over Russia’s invasion of Ukraine.

"In the current environment, Sberbank has decided to withdraw from the European market," the lender said in a statement carried by Russian news agencies.

The bank said its subsidiaries in Europe were facing an “abnormal outflow of funds and a threat to the safety of employees and branches,” according to Russian news agencies. They did not provide details of the threats.

Authorities in Austria and Czech Republic had taken actions in recent days against Sberbank’s activities in Europe. They were targeted last week by tough US sanctions aimed at limiting their businesses internationally and over the weekend barred from the international SWIFT payment system.

The move was the latest consequence of Russia’s invasion last week, which has led to warfare across Ukraine and unprecedented Western sanctions aimed at isolating Russia’s economy.

With Moscow having failed in its aim to swiftly overthrow Ukraine's government after nearly a week, Western countries are worried that it is switching to new, far more violent tactics to blast its way into cities it had expected to easily take.

In pics-Ukraine invasion:These assets of Russian President Putin can be seized

More than 836,000 people have fled Ukraine since the Russian invasion, the UN's refugee agency says, with the number rising rapidly.

European banking regulators said Tuesday that the European subsidiary of Russia's Sberbank would be wound up.

On Monday, the European Central Bank had said that the European affiliate was "failing or likely to fail" after it "experienced significant deposit outflows as a result of the reputational impact of geopolitical tensions".

Sberbank Europe AG also has subsidiaries in Bosnia, the Czech Republic, Hungary and Serbia, which do not come under the jurisdiction of the European Central Bank.