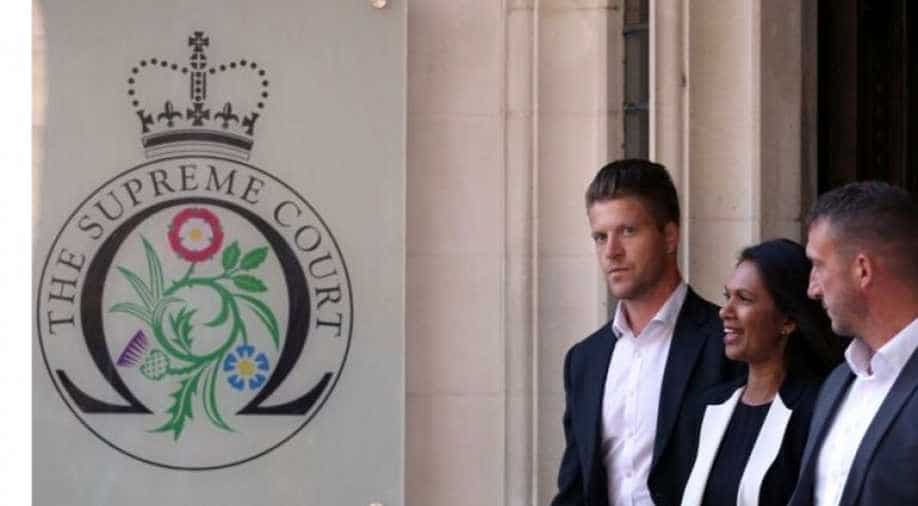 Johnson rejected criticism from his opponents that his decision to suspend parliament for five weeks at such a crucial time was to prevent it from challenging his Brexit policies.

The UK Supreme Court will say on Tuesday whether Prime Minister Boris Johnson acted unlawfully when he suspended parliament just weeks before Brexit, a ruling that may further complicate his plans to lead his country out of the European Union next month.

A decision against him could lead to parliament reconvening earlier than scheduled, giving it extra time to thwart his Brexit-or-bust agenda to depart the EU by Oct. 31, with or without an exit deal agreed with the bloc.

His foes allege that Johnson suspended the assembly, where he lacks a majority, to sidestep opposition to his plan. Most lawmakers are opposed to a so-called "no-deal Brexit" scenario, fearing that it would cause economic damage and severe disruption, including to food and medicine supply chains.

He says the suspension was necessary to give the government time to prepare a new legislative agenda.

The Supreme Court's ruling is due to be delivered at 09.30 GMT. With a constitutional crisis engulfing Britain, there is a high degree of uncertainty on exactly what it might say, and what the ramifications will be for Johnson and for parliament.

On one end of the spectrum, the justices could say that the suspension was a political matter on which they cannot pass judgment. On the other end, they could say that Johnson acted unlawfully and give instructions as to how and when parliament should be recalled. Other outcomes in between the two extremes are possible too.

Striking a defiant tone ahead of the ruling, Johnson rejected criticism from his opponents that his decision to suspend parliament for five weeks at such a crucial time was to prevent it from challenging his Brexit policies.

"Parliament will have bags of time to scrutinise the deal that I hope I will be able to do (with the EU's 27 other members)," he told reporters on Monday during a flight to New York, where he was due to attend the UN General Assembly.

"'Donnez-moi un break (give me a break) is my message to those who say there will be no parliamentary scrutiny. Absolute nonsense," he said.

The parliament was suspended, or prorogued in the British jargon, from September 10 to October 14. The prorogation was approved by Queen Elizabeth, Britain's politically neutral Head of State, acting on the advice of the Prime Minister as she is required to do under the country's complex, uncodified constitution.

Johnson told the monarch that the suspension was required to give him time to prepare a Queen's Speech, another term of jargon referring to a new legislative agenda. The legal challenge hinges on whether he gave a false pretext and abused the power of prorogation.

Prior to the suspension, he had lost a series of crucial votes on how and when Britain should execute its exit from the EU, decided in a 2016 referendum that split the nation bitterly.

Asked on the flight to New York whether a ruling by the Supreme Court that he had deliberately misled the queen would make his position as Prime Minister untenable, he replied: "No. I think that the reasons for wanting a Queen's Speech are extremely good."

Before the prorogation, a cross-party rebel alliance of lawmakers managed to force through a law aimed at stopping a no-deal Brexit by requiring Johnson to ask for a three-month extension if he has not been able to strike a deal by October 19.

Johnson and other government ministers have maintained that Britain will exit on October 31 and will not accept any further delays, indicating that they might seek to ignore the legislation and possibly bring about further court battles.