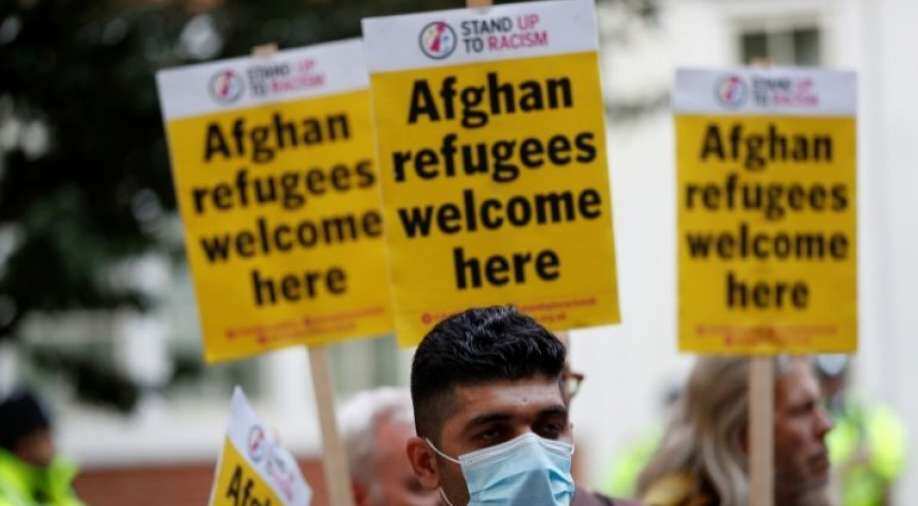 Demonstrators take part in a protest, called jointly by Stand Up To Racism and the Afghan Human Rights Foundation, in support of refugees from Afghanistan, in London, Britain August 23, 2021. Photograph:( Reuters )

Britain earlier announced plans to welcome up to 5,000 Afghans fleeing the Taliban during the first year of a new resettlement programme that will prioritise women, girls and religious and other minorities.

The British government acknowledged that more can be done to help and assist Afghan nationals and their families settle in Britain as they escape from Afghanistan following its takeover by the Taliban.

Britain earlier announced plans to welcome up to 5,000 Afghans fleeing the Taliban during the first year of a new resettlement programme that will prioritise women, girls and religious and other minorities.

"Approximately only 5% of councils have declined to sign up to our relocation and assistance scheme and close to a third of councils have already stepped up to support new arrivals, but we know there is more that can be done for those that have risked their lives supporting us", a UK government spokesperson said in an emailed statement late on Friday.

"This is why we are calling on all councils who have not yet come forward with a firm offer of support to help Afghan nationals and their families as they build a new life here in safety", the spokesperson said.

The Telegraph newspaper reported earlier that around 30 councils have refused to take any Afghan refugees who have arrived in the UK after fleeing the Taliban.

An initial request from the Ministry of Housing, Communities and Local Government to local authorities was met with push back from around 10% of England's 333 councils, the newspaper had reported.

"We do not recognise these figures", the government spokesperson said in response to the report.

"Councils in England, Scotland and Wales will have access to a share of an additional £5 million to help them provide the necessary housing and support to Afghans who have worked for this country in Afghanistan, but who now face threats of persecution or worse," the statement added.

The Taliban seized power in Afghanistan in mid-August from a U.S.-backed government, sending thousands fleeing and potentially heralding a return to the militants' austere and autocratic rule of two decades ago.

Britain has so far evacuated more than more than 14,500 Afghan and British nationals, the defence ministry said late on Friday.