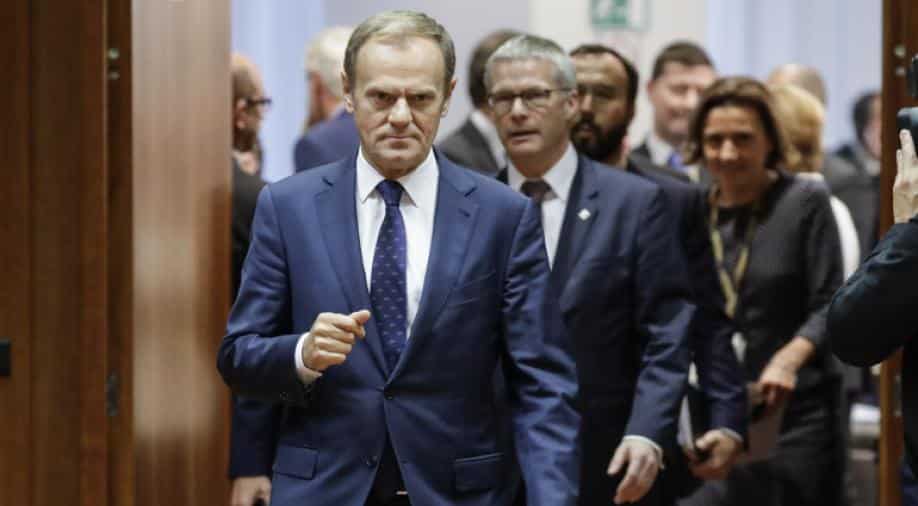 Tusk made the comments at a news conference in Brussels, where he was flanked by Irish leader Leo Varadkar.

British politicians reacted angrily on Wednesday to European Union leader Donald Tusk after he wondered "what special place in Hell" awaited those who advocated Brexit without a clear plan, calling him a "devilish Euro maniac".

"Donald Tusk once again shows his contempt for the 17.4 million people who voted to escape the corruption of the EU," said Sammy Wilson, Brexit spokesman for Northern Ireland's Democratic Unionist Party.

"This devilish Euro maniac is doing his best to keep the United Kingdom bound by the chains of EU bureaucracy and control," he added.

Tusk made the comments at a news conference in Brussels, where he was flanked by Irish leader Leo Varadkar.

"I think that what he has said is pretty unacceptable and pretty disgraceful," she told BBC Radio 4.

"I'm sure that when he reflects on it he may well wish he hadn't done it."

"I don't recall any president insulting members of this House, members of the government and the British people in such a way," he said.

But anti-Brexit MPs were supportive of Tusks's comments.

"Sometimes the truth hurts, doesn't it?" Joanna Cherry, an MP from the Scottish National Party, said in parlaiment.

The outburst dominated the online editions of Britain's newspapers, with Brexit-supporting tabloid The Sun leading with the headline "EU'VE LOST IT", adding that "sneering Donald Tusk has taken an extraordinary dig at Brexiteers".

The Mail Online carried a picture of Tusk in high spirits with Varadkar after the news conference, underneath the headline "EU President Tusk is caught laughing at the row he will cause".

Brexit figurehead Jacob Rees-Mogg, a staunch Catholic, questioned Tusk's theological credentials, saying he was "hardly in the Aquinas class...and he seems to have forgotten the commandment about not bearing false witness".

Gerard Batten, leader of the anti-EU UKIP party, said the comments were a sign that Tusk was "getting overwrought".

"Mr Tusk has forgotten that in Dante's Inferno the lowest level in Hell is reserved for traitors. I would remind him that those who want their country governed by a foreign power are traitors," he added.