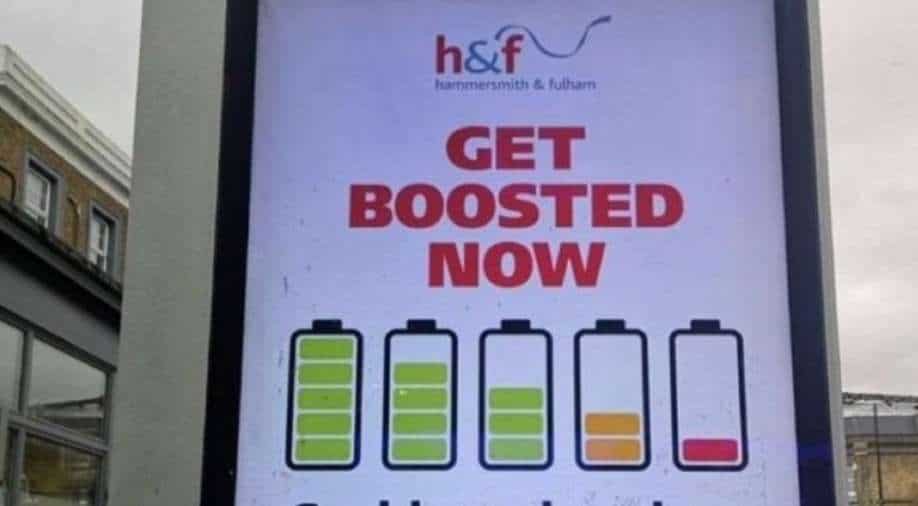 Hospitalisation rate even lower among those who had booster shots Photograph:( Twitter )

Reports said health officials will go on a door-to-door campaign in the UK to give people jabs as new virus rules came into effect in Northern Ireland, Scotland and Wales post-Christmas.

Reports claim Britain has given the second-highest booster does in the world after Israel and Chile.

As the Omicron variant continues to spread, reports said health officials will go on a door-to-door campaign to give people jabs as new virus rules came into effect in Northern Ireland, Scotland and Wales post-Christmas.

Scotland's first minister Nicola Sturgeon had earlier declared that Omicron had become the dominant coronavirus strain in the country as Wales leader Mark Drakeford warned people to get ready for a "storm of Omicron".

Reports say health officials will continue to give booster doses to citizens throughout Christmas, Boxing Day and beyond as thousands of people have already made online bookings. Reports say nearly 1 million people received the booster doses on Wednesday.

UK PM Boris Johnson had informed that new curbs will not be imposed although the situation was under review. PM Johnson had switched to "Plan B" after a surge in Omicron cases as masks were mandatory in shops and public transport.

PM Boris Johnson had earlier warned of a "tidal wave" of Omicron cases. This week the country reported 122,186 new COVID-19 cases which increased from 119,789 cases reported on Thursday.

According to Britain's Office for National Statistics (ONS), 1 in 20 people in London were projected to be infected with the virus till December 16 with the number rising to 1 in 10 this week. ONS data suggested that 1 in 35 people in England were likely hit with the virus with 1 in 65 infected in Scotland.

Britain is one of the worst-hit countries due to the virus with more than 147,850 fatalities and over 11 million COVID-19 since the pandemic began last year.