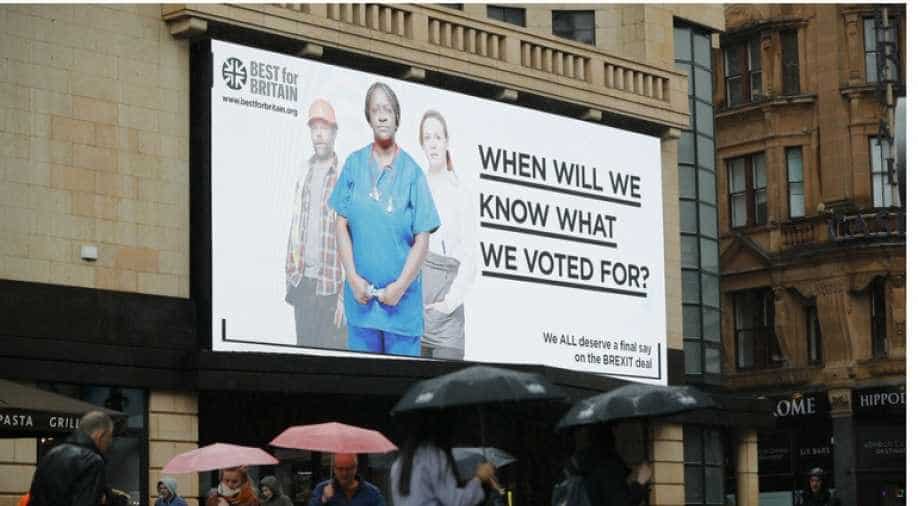 Pedestrians walk under a new billboard launched by campaign group Best for Britain in Leicester Square in London. Photograph:( AFP )

Anti-Brexit group Best for Britain on Wednesday unveiled a nationwide billboard campaign as part of a bid to force another public vote on leaving the European Union.

The campaign will also include posters, social media and other digital advertisements aimed at both Leave and Remain voters.

Billboards will this week appear at London hubs Leicester Square, Westfield Stratford and Canary Wharf as well as in Birmingham, Manchester and Liverpool.

The campaign comes as Britain begins a one-year countdown from Thursday to its scheduled departure date from the bloc.

Advertisements calling for a "People's Vote" on the final Brexit deal will also appear in the Evening Standard and The Guardian newspapers.

"The campaign is aimed at involving the public into the campaign calling for a public vote on the Brexit deal," Best for Britain said in a statement.

The campaign has not specified the terms of the vote they are calling for, and what would happen if the deal were rejected.

The posters feature British citizens from various walks of life under the words "When will we know what we voted for?" Chair of Best for Britain Mark Malloch-Brown said that voters were "profoundly and increasingly frustrated that they still do not know what Brexit means."

"This government's strategy to fudge, dodge and delay their way to a rubber stamp vote in October is already beginning to unravel.

This media campaign simply aims to hasten that process," he explained.

The campaign group hit the headlines last month when it emerged that it had received a £400,0000 donation from billionaire investor George Soros. The revelation led to accusations from the pro-Brexit newspaper The Daily Telegraph that he was leading a "campaign to overturn" the June 2016 vote.